When my girlfriend and I planned our recent Scotland trip, we did not know that there was a direct connection from Glasgow to Glengoyne, making the distillery as easy for us to reach as Auchentoshan (which we visited two days later). We only found out about this by chance, when Lesley of The Rare Malt Whisky Company and Miss Malt (check out her business and blog!) saw us dragging our baggage up the steep hill from Caol Ila to the main road on Islay. She stopped her car and gave us a ride to the bus stop in Bridgend, during which we – obviously – came to talk about whisky. When Lesley heard that we had a couple of days in Glasgow ahead of us, she recommended us to go and see Glengoyne, arguably the country’s most picturesque distillery.

Getting there was indeed super-easy. Twenty pounds bought us two return tickets from Buchanan Bus Station in the center of Glasgow to the gates of Glengoyne, which lies about 10 miles outside the municipal border. Apparently, our driver was a tad behind schedule and so he kicked the pedal to the metal towards the end of the 45-minute journey. He dashed along the bumpy road at such a speed that the drive felt like a rollercoaster ride. While this was good fun, my girlfriend and I were still a bit relieved when we finally stumbled out of the bus. And I am pretty sure that many of the two dozen other passengers (most of which were also headed for Glengoyne) felt the same.

The first thing we recognized when we set foot onto the distillery premises was the staggering beauty of the place. Ian Macleoad Distillers, who own Glengoyne, did not exaggerate when they claimed in their info brochure that this whisky production site looks as if it had been taken out of a picture book. The buildings, the scenery, the setup, the interior of the visitor center – pretty much everything about Glengoyne makes your jaw drop! And by the time that thought had formed in my mind, I had not even seen the idyllic waterfall that served as the distillery’s original water source until demand for H2O became too high for this little creek to sufficiently provide for Glengoyne’s needs.

The tour itself was also fantastic. After a warm introduction and a welcome dram, our guide Ashley lead us across the distillery grounds, sharing all kinds of information with us. Did you know, for example, that Glengoyne is situated directly on the borderline between the Highlands and the Lowlands? While the casks are stored in the Lowlands, the production itself takes place across the street in the Highlands. And that is why they proudly declare their wonderful product a Highland Single Malt Scotch Whisky. Since Glengoyne does no longer do their own malting for reasons of cost efficiency, that part fell a little short compared to previous tours I had attended. Yet, they made up for it by putting extra focus on the role of different wood sorts and cask types in the maturation process. The display they created to visualize this turned out to be a real eye-catcher!

Once we had seen everything, we gathered in the visitor center, where Ashley gave us a wrap-up of Glengoyne’s core range accompanied by the special perk of the “Wee Tasting Tour” as compared to the standard tour: a dram of the distillery’s classy 18yo! I can hardly think of a better way to bring such a great whisky experience to a close. And, of course, I can also not think of a single reason that speaks against visiting Glengoyne when you are in Glasgow (or close by)! 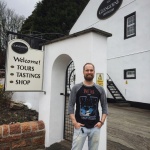 In front of Glengoyne

The pond & the visitor reception 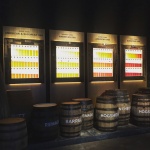