Although I had enjoyed drams at Christiansen’s before, I never got to attend one of the many tastings they host in their premises throughout the year. So when I read on Facebook that the bar would stage a Pernod Ricard masterclass with renowned spirits consultant Jürgen Deibel, I signed up for it right away. Together with round about 20 other whisky enthusiasts, I experienced an incredible two-hour Scotch sensation filled not only with high-class drams but also with a ton of anecdotes and a wealth of insights.

The first dram we were invited to try came from a distillery that has been active for more than 120 years without respite. Longmorn opened its gates in 1894 and continued to produce unceasingly ever since. According to Jürgen, the reason for the distillery’s ongoing popularity lies in the fact that their output is particularly well-suited for blending. Usually, a malt can either be used as “backbone”, “filler” or “top dresser” in a blend. However, you sometimes stumble upon a whisky that covers not one but two of these bases at once. Thanks to its big mouthfeel and strong body, Longmorn’s spirit makes an excellent “backbone”. But due to its distinct fruitiness and spicy finish, it also qualifies as a first-grade “top dresser”. This very rare complexion put Longmorn in the center of the attention of two of the world’s biggest spirits companies, namely Diageo which owns Johnnie Walker and Pernod Ricard which owns Ballantine’s. Though the latter ultimately won the bid on the distillery, Longmorn is to this day legally bound to sell a part of their output to Diageo as well.

Next up was a blend by Ballantine’s, a pour that many drammers only know in combination with coke and ice. And I would be lying if I said that I was not in the slightest surprised to find a bottle of Ballantine’s amidst the night’s exquisite line-up of well-aged single malts. Quality-wise, however, the citrus-fresh blend did not fall behind the other bottlings at all. Bursting with green apples, rich spices and flowery notes, this very complex Scotch whisky turned out to be a huge surprise for many of the attendees. No wonder Jim Murray declared it the “World Whisky Of The Year 2011” in his influential Whisky Bible. The 18-year-old expression by The Glenlivet, which was third in line, proved to be a peculiarity within the best-selling distillery’s portfolio. While The Glenlivet usually matures its whisky in ex-American Oak barrels, this particular pour did also spend a reasonable amount of time in Oloroso sherry casks. The result is a well-balanced and pleasantly subtle Speysider, in which the distillery’s characteristic apple and pineapple flavors mingle with delicious notes of raisins and nuts.

From the “Valley of the Smooth-Flowing One” we then proceeded to the heart of the Speyside, where Aberlour is located. When we tried their 16-year-old and their 18-year-old back to back, we learned that the age difference is not the only thing distinguishing these two whiskies. While Aberlour 16yo is “double cask matured”, Aberlour 18yo is “matured in select casks”. These different maturation processes turned the former into an easily drinkable whisky bursting with creamy vanilla and the latter into a complex dram packed with luscious spices.

Speaking of luscious and luxurious, let us now come to the sixth bottle Jürgen opened for us: a 21 years old The Glenlivet vatted exclusively from whiskies stored in the distillery’s legendary Archive (i.e. the on-site warehouse harboring The Glenlivet’s most precious casks). In the nose, this limited edition was rich with ripe bananas, dried fruits and creamy nougat. In the mouth, it delighted us with a masterfully laid-out mosaic of flavors as well as very long finish. The perfect way to let such an evening end… not quite! As a little surprise, we got an encore in the form of Aberlour’s signature sherry bomb A’bunadh. Bottled at 61.2 per cent and matured entirely in 1st fill Oloroso sherry casks, this sweet batch strength bottling educed a final round of “wows” from the savouring mouths of the attendees. Someone pointed out that the A’bunadh was a picture-book dessert dram and I think he absolutely nailed it with this classification! 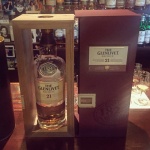 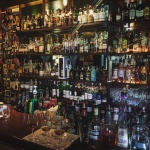