Weinkellerei von Have is a winery and maker of spirits based in Hamburg-Bergedorf. They are well known for their Rotspon from Hamburg and hand-made liqueurs, rum, gin and so on. In their shop they sell more than 500 different wines and more than 500 spirits. Of course, they also have a wide range of whisky from all over the world. Tastings with different topics are offered regularly.

The first tasting in 2017 was called A Man’s Best Friend. This name was chosen because they did not only want to present whisky but also spirits that are usually a bit under everyone’s radar. For this reason they offered five of their whiskies, rums, tequilas and cognacs to choose from. It was quite interesting to try a Corralejo Tequila Anejo, a Prince Polignac VSOP Cognac or a Rum Barbancourt 4yo, but in first place I came there for the whisky. Luckily, it was also possible to try every whisky of which they had an open bottle in their store.

I started my evening with The Epicurean by Douglas Laing which became almost a classic one for me. I really like its sweetness, its taste of herbs and its floral note. After that I went on to Masterson’s Straight Rye Whiskey from Canada. A lot of herbs and sweetness in there, too. This whiskey was chosen by Jim Murray as best Canadian whiskey in 2015 and it was worth trying it, but I do not think that I need a bottle of this for my own shelf. Up next was a Stratheden by The Lost Distillery Company which is sweet and fruity with more than just a hint of chocolate. A very nice blended malt but a bit too pricy, I think, as it is about EUR 60.00 a bottle.

The definite highlight of the evening came from a small village a few kilometres away from Hamburg. On Gut Basthorst, Mackmyra from Sweden ripened some of their whisky in four Rotspon casks from Hamburg. Each of them was used for a single cask bottling and named after a Swedish Nobel Price winner. They were bottled at cask strength and I was surprised how different those four bottlings are. While Dag and Alfred are really round and fruity, Nathan is a bit more complex and maybe complicated. Klas is somewhere in-between the others. My favourite one was definitely Dag, which I took home at the end of the evening.

It was a very nice evening in a small group of maybe 30 people. Nice hosts, tasty canapés and fantastic drinks. I’ll definitely be back for their next open tasting. 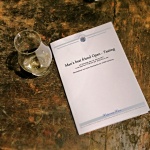 Select whiskies at the Weinkellerei von Have