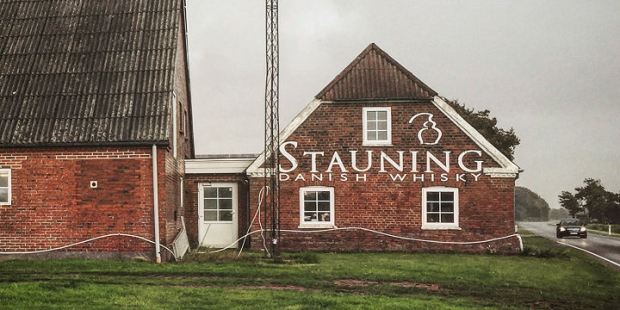 Making whisky is easy. First you make a beer. Then you distill it. And then you let it age. Sure, if that is all you know about the process, the outcome of your efforts will not be very good. But technically it will still qualify as whisky. And that is all the founders of Stauning Whisky wanted when they sat together 12 years ago and fantasized about being the first Danes to produce “uisce beatha”. While none of the nine friends – a cook, a teacher, a butcher, a doctor, a pilot and four engineers – had any experience in distilling before, they self-educated themselves eagerly and tried stuff out in a backroom of the local butcher shop. Round about a year later, they sampled a peated spirit, which by happenstance found its way into the hands of Whisky Bible author Jim Murray. Despite all the shortcomings this young spirit still had, the world-famous writer sensed something in it that reminded him of “Ardbeg in the seventies”…

For the creators of the praised liquid, this knightly accolade was enough to go all in! They raised as much private funding as they could, bought an old farm in the countryside, turned the premises into a distillery and went on to pursue their former hobby professionally. What followed is nothing less than a modern fairytale: In 2009 Stauning produced their first new make, in 2012 they sold their first bottle, in 2013 they won their first medal and in 2015 Diageo came on board, buying 40 per cent of the distillery and investing an enormous 100,000,000 kroner into its further development! From that money, our guide and “storyteller” Katja told us, a brand-new distillery is currently being built right next to original farm house in which much of Stauning’s one-of-a-kind success story took shape.

After this fun and informative wrap-up of Stauning’s early days, Katja let us into the production halls, consisting of the bottling room, the malt floor, the still house, the fermentation tank and the cask storage. As we strode along these facilities, we learnt that every step of the production is still done by hand at Denmark’s first whisky distillery. However, since some of the tasks would be rather tedious or exhausting if performed by a human on a daily basis, the founders of Stauning – whom Katja amiably kept referring to as “the boys” – also invented a number of ingenious appliances, such as the “corn flipper” or the “washing machine”. When embarking on an adventure like this, it certainly does not hurt to have a number of skilled engineers on your team…

At the day of our visit, Stauning was procuding their award-winning Young Rye, one of the distillery’s trio of core range expressions besides their Traditional Danish Single Malt Whisky and their Peated Danish Single Malt Whisky. As the flames danced underneath the copper stills, we got to soak in all the different sensations that make a distillery visit such a lively and unforgettable experience. Among others, we got to nibble the malted barley (or “cereals for grown-ups” as Katja called it), feel the heat in the still room and breath in the fumes of the new make.

After the extensive tour, which lasted for more than an hour, we went back into the visitor center, where we savored 1cl of each of Stauning’s three regular bottlings under Katja’s guidance. I tremendously enjoyed them all, but was not able to take any of them home – demand for Stauning’s products is so high that the distillery itself has not had any of their standard editions for sale in almost 3 years! However, to make sure their visitors must not leave empty-handed, they have produced a Distillery Edition, which is their celebrated Peated Whisky matured in rye casks instead of ex-bourbon barrels. While these cute 0.25 liter bottles were sold at a rather steep price, I could not pass them by. After all, I was still psyched from the amazing tour I had experienced and the excellent whiskies I had tasted! 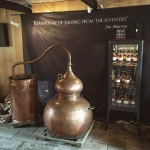 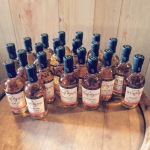 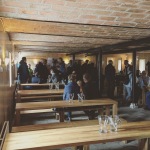 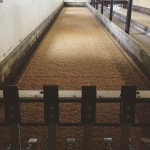 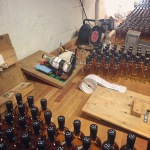 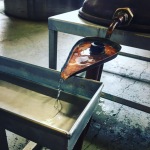 Straight out of the still 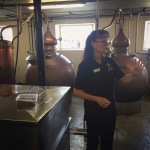 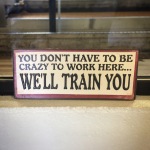 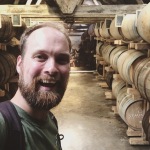 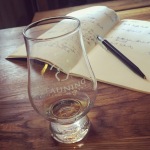 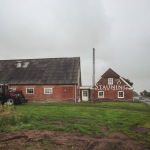 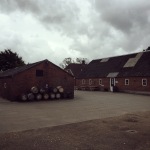 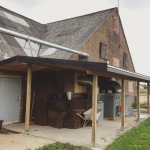 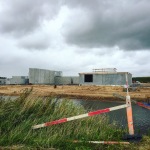 A new distillery in the making…