Dublin offers many beautiful places for lovers of Irish whiskey. Besides big names like Jameson or Teeling there are also many nice bars and pubs that have a big range of (not only) Irish whiskeys on the tap. But there is another must-see in the center of Dublin. Right next to famous Trinity College and only a few steps away from the Molly Malone statue, you find the Irish Whiskey Museum, where you can choose between three different tours. The main difference between these tours is the number of whiskeys you can try in the tasting. If you decide to take on the Blender’s Experience Tour, you also get to blend your own whiskey and take it home afterwords.

It was no question that we had to do the Blender’s Experience Tour, which lasts about 90 minutes. Before we went to the first room of the museum, we were welcomed by our guide James. Everybody was asked where he or she came from and what knowledge of whiskey they already had. Afterwards, we learned a few things about the history of whiskey in Ireland and the origin of the word “whiskey”. You might all know that it comes from the Gaelic term “Uisge Beatha”, which means “water of life”. It turned into whiskey during the years. The first documentary evidence of whiskey comes from monks in Ireland.

The second room was customised like an old living room from the 18th century. We learned about illegal distillation during that time, the process of distillation and why people actually started making whiskey. As water was too dirty to drink, people started making beer. All other steps to whiskey were found more or less by coincidence. Illegal distillation was very common in Ireland in the 18th and 19th century. While we have knowledge of about 350 places where illegal distillation took place in England in the 1830s (plus about 680 in Scotland), there were more than 8,000 in Ireland. People tended to drink a lot of alcohol during that time. Many were even burried alive as their delirium was mistaken for death. Because of this, people started to make a three-day death watch and put a bell into the casket. This is still common in Ireland nowadays and it is the origin of the saying “Saved by the bell”.

In 1875 there was the Great Whiskey Fire in Dublin. Burning whiskey ran through the streets like lava and inflamed a lot of buildings. Also, four people died that night, albeit not because of the flames or smoke. They drank the hot whiskey, which they collected from the streets.

Arriving in the third room, which was an ancient Victorian pub, we were served our first drink. We got the chance to try a Poitin by Glendalough, which was surprisingly smooth. While enjoying our Poitin, which is known as new make, moonshine or schnaps in other countries, we learned about the differences between pot still whiskey, triple distilled single malt and single grain. After that, we went on to the tasting room, where we found four glasses of Irish whiskey.

We were served a single grain whiskey from Glendalough Distillery, a 12 years old single malt whiskey by Knappogue Castle, a single pot still whiskey by Power’s and a peated single malt whiskey from Connemara. After giving all four whiskeys a try, we were asked to make our very own blend from them. Therefor, we were given a fifth glass to try our blend and a pipette to find our mixture. James also told us about the (rough) composition of some very popular Irish whiskeys such as Jameson Original or Writer’s Tears. We then tried to reach a similar result. After bottling our own blend, we were given our final whiskey for the tour, which was a 12 years old Tullamore.

At the beginning of our tour, James told us that people taking the Blender’s Experience Tour usually go home a little bit more drunk than those who booked the other tours. And I can’t say that he was lying. We enjoyed our visit at the Irish Whiskey Museum very much and James was a perfect guide. Even if you already knew a bit about the process of whiskey making, the tour still tought you a lot about the history of whiskey in Ireland. If you have a trip to Dublin planned, you should definitely schedule a visit at the Irish Whiskey Museum. 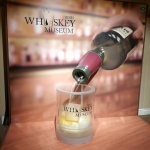 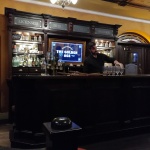