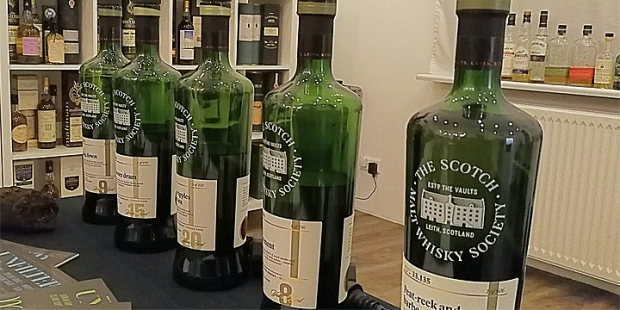 For several months, I was struggling with myself wether I should become a member of the Scotch Malt Whisky Society or not. Throughout this time I tried several bottlings of theirs and not once was I disappointed. In addition, my wife also enjoyed almost every SMWS dram she had in her glass. So when they had their last special offer for a membership I took hold of it. In the Hamburg area where I live, the SMWS offers monthly preview tastings of their latest outturn, which are hosted by Chris Rickert from Hansemalt and sometimes follow special topics. At the beginning of October, Chris invited us to five drams themed “All Things Peaty”.

One peculiarity of the SMWS releases – all of which are bottled at cask strength – are their wonderful names. Just like the official tasting notes published by the Society, these names are created by singer and songwriter Robin Laing, who often serves as chairman of the panel  choosing the casks that are to be bottled next. The name Robin Laing chose for our first dram of the evening is “Winding down”. It is a young Bunnahabhain with a sweet and smoky nose. When you take your first sip, it is peppery and spicy, but after some time you feel like standing right next to the sea with its salty, maritime notes. Chocolate and coffee pleasantly chime in from afar.

From Islay we went on the Highlands; more precisely to the Orkney islands, where Highland Park is located. My favourite dram of the evening is called “Sundowner dram”. It does not have too much smoke in the nose, but makes up for this with an abundance of exotic fruits like mangos and bananas. The first sip is like an exotic fruit cocktail with honey, nuts, almonds and a little bit of smoke. After a few moments, the smokiness increases. But it still remains in the background. After the “Sundowner dram” we had a pour originating from the oldest whisky warehouse in the world, namely Bowmore’s No.1 Vaults. “Aromatic ripples on a calm sea” offers a slight smokiness combined with sweetness and something that reminded me of rubber. On the palate it surprises with fresh sea air and algae just washed to the beach. In addition, there are also notes of lychee, gooseberry and chamomile tea.

The only mainland dram of the evening was “Manly contentment” from Ardmore distillery. Eight years old, it was youngest whisky of the selection. In the nose, I made out a lot of cured meat and barbecue notes. But when I sipped it, I was surprised that this fine dram had a lot more to offer than I thought. It has a pleasant malty sweetness combined with smoked ham. After a few minutes, the smoke steps a bit more into the foreground, where it mingles with notes of burned wood and very dark chocolate. The grand finale of the evening was the dram the majority of the guests were curious about the most: A 9-year-old Ardbeg called “Peat-reek and carbecue char” fully matured in a 2nd-fill Oloroso Sherry butt. In the nose it offers a combination of smokiness and sweetness as well as oranges and lemons. It is surprisingly smooth for its ABV of 60.2% and the peatiness is integrated very well. Though it has a rather short finish, it places very nice notes of citrus fruits and marzipan on the palate. Unfortunately, it will not be easy to still get hold of this fine Islay malt as all of the 606 bottles are already sold out from the SMWS online shop.

Though I am not the biggest fan of peated malts, the “All Things Peaty” tasting was a fantastic event with delicious drams, nice attendees and a great host. Surely, I will return for one of the next Scotch Malt Whisky Society tastings at Hansemalt located at Hamburg’s Fischmarkt. 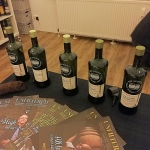 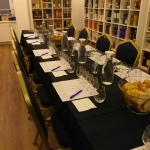 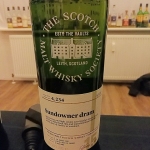 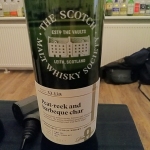