A few days ago Norbert Meyer-Sand, the owner of a very cool online mailorder called Whisky Experience, invited me to accompany him to a VIP tasting with Kilchoman’s maltman Jamie Muir. Organized by Corinna Schwarz and Adam Dittrich of the distillery’s German importer Vibrant Stills, the event took place at Hansemalt right in the heart of Sankt Pauli. Before the actual tasting had even begun, I already held the first drink in my hand. Though I just came in from the cold outside, I really enjoyed my refreshing New Spirit Bramble Liqueur mixed with Schweppes Dry Tonic Water. A very pleasant start into an amusing evening.

In a really entertaining way, Jamie shared with us his distinct knowledge of Islay, Kilchoman and, of course, the six drams we had in our glasses. The first whisky production site that was built on the island in 124 years, Kilchoman started production in 2005. Right from the start, the farm distillery’s founder Anthony Wills aimed at creating a spirit that transported the original taste of Islay – the birthplace of his wife Kathy. To get a better understanding of Kilchoman’s signature style, we started with the smoky but also floral and sweet New Make Spirit, which got thinned down to an ABV of 63.5% with peaty (and slightly brownish) Islay water.

We then continued with two classic drams from Kilchoman’s core range. As we enjoyed the Machir Bay and the Sanaig, we learned a lot about cask management at Islay’s farm distillery. While the ratio of bourbon barrels and sherry casks is 80/20 for Machir Bay, it is 30/70 for Sanaig. As Jamie pointed out more than once, the quality of the casks plays a central role here. The bourbon barrels come from Buffalo Trace and cost about 250 GBP each. Among others, they are that expensive because they do not get demounted for shipment as is often the case when American oak is exported to Scotland. As costly as this sum might be, it is almost a bargain compared to the prices of the sherry casks the distillery uses. Since demand for this kind of wood is incredibly high in the Scotch industry and beyond, many sherry producers just fill their casks briefly before they pour the sherry away and sell off the containers to Scotland. But this procedure is not being applied to the casks Kilchoman buys. Coming from Bodega Miguel Martin, they previously held high quality Oloroso sherry until the fortified wine was fully matured. Thus, they come with a hefty price tag of ~600 GBP each. Besides the aforementioned two, Kilchoman also experiments a lot with other types of wood that previously held rum, port, brandy or wine. To get the most out of their casks, they store them traditionally in a Dunnage Warehouse, where they lie on top of each other in a maximum of three rows.

After a short break during which we were treated to tasty pasta salad and delicious fingerfood, we went on with a whisky that represents everything Kilchoman stands for. The barley used for the 100% Islay is fully grown and processed on the island. As opposed to the two expressions before, which were peated at 50ppm, this 7-year-old whisky “only” clocks in at 25ppm. Although it is less peaty than other Kilchomans, it certainly is not less rich in flavor. While the 100% Islay is fully bourbon matured, the Loch Gorm – which is named after the biggest lake on Islay – was kept exclusively in Oloroso sherry casks for eight years. This whisky is a prime example of what Kilchoman aims for. They want to produce a (heavily) peated Scotch that is of exceptional quality even at young age. At several occasions, Jamie underlined: “We are proud to make young whisky”! But he also told us that he is quite curious to learn what an old Kilchoman would be like. The final dram of the evening was a Small Batch exclusively bottled for Germany. It was kept in two Oloroso sherry casks for eight years and ten months before it was bottled at cask strength with an ABV of 56.6%. This was definitely my favourite dram of the evening, not only because it was incidentally bottled on my 37th birthday but also because of its unsuspected toffee and chocolate notes.

After such an informative and entertaining event, I went home with lots of new impressions and learning. Though it was already quite late and very cold, I was somehow feeling sunshiny. I am very curious about the further development of Kilchoman Distillery (who are currently in the process of expanding their distillery to double their capacities) and cannot wait for the bottlings they will present to us in the future. Considering that this article ended up getting pretty long, it might be hard to believe but I barely scratched the surface of the wealth of insights, knowledge and information that Jamie shared with us! What is left for me to say is thanks a lot to Jamie, Corinna, Adam and Chris for a wonderful tasting and to Norbert for taking me there with him. If you ever make it over to Islay, be sure to pay Kilchoman Distillery a visit. They will be happy to welcome you in their cozy cafe and beautiful visitor center. 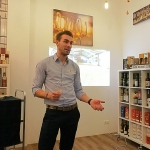 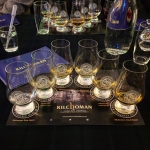 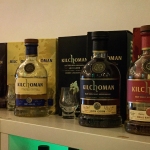 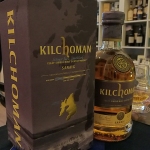 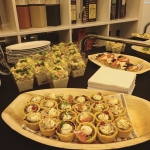