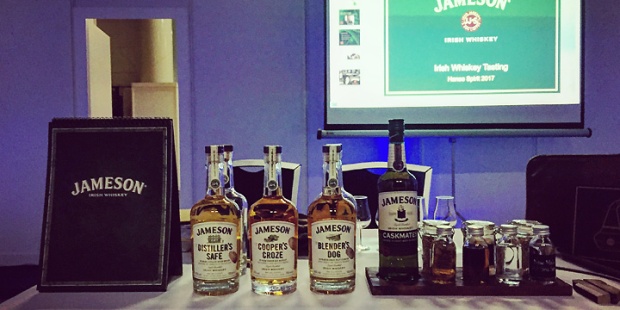 “Sine metu”, our host Laurie told us in her introduction to this tasting held at Hanse Spirit 2017, means “without fear” in Latin. Ever since John Jameson moved to Dublin in the late 18th century with his wife and many children, the founder of Jameson distillery lived by this credo. To boldly go where no man has gone before. Or, a bit less Starship Enterprise-y, to dare what no whiskey maker has dared before. Even today, almost a quarter of a millenium later, the company John built still embraces this principle wholeheartedly.

One example for this is the Jameson Caskmates, which kicked off this tasting. While I am not sure if it is the world’s first whiskey with a craft beer finish, it surely is the first such spirit that got a large-scale release. Those of you who have been following BarleyMania from the beginning, might still remember my review of this super-tasty experimental whiskey. Back then, I said that “if you are both a whisky fan and a beer drinker, you will find a new friend for life in the Jameson Caskmates“. And now that I have just had it again, my sentiment remains unchanged. According to Laurie, the Caskmates not only tastes great on its own, but also as a supplement to a full-flavored stout beer. I will definitely give this pairing a try.

Next up were the three expressions of Jameson’s newly launched Whiskey Makers Series. As the name of the range suggests, each of them was conceived by one of the key figures in Jameson’s well-oiled whiskey making machinery. The Distiller’s Safe is the baby of the company’s Head Distiller Brian Nation. Matured for a brief 5 years (which is 2 years less than the Jameson Original), this yeasty pour highlights the qualities of Jameson’s distillate long before the casks left too big of a mark. Do not make the mistake of dismissing it on account of its youth though! The Distiller’s Safe is a great example of how exciting a well-made young whiskey can be. The Cooper’s Croze positions itself at the opposite end of the spectrum. Refined and perfected by the distillery’s Head Cooper Ger Buckley over a period of 12 years, it received a staggering complexity from being kept in four different cask types for such a long time. The last bottling in the Whiskey Makers Series is The Blender’s Dog, courtesy of Jameson’s Head Blender Billy Leighton. This 10yo Irish whiskey is particularly smooth, soft and pleasant – the perfect link between the other two members of the trio.

While all four whiskies we had that afternoon were fantastic, I still have one point of criticism. The acoustics in the tasting room was – mildly put – capable of improvement. For me and my friends it was okay, since we were seated at a table in the front. But those sitting further back had a hard time understanding Laurie, who soldiered through this tough situation as good as she could. After her presentation, she went from table to table once more, answering all questions patiently and giving everybody a (very generous) re-fill of the whiskey they had enjoyed the most. Still, for the future I would recommend to either move the tastings to a less noisey place or supply the rooms with microphones and speakers. Nevermind. When I recall this tasting, I do not think of the sub-par conditions. Instead, my number one take-away – besides a fun time and a great selection of whiskies – is this: Thanks to its distinct focus areas, the wonderful Whiskey Makers Series did an outstanding job at helping me to fathom the multi-layered process of whiskey making a little better. Needless to say, I am helluva glad about that! 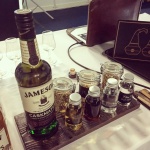 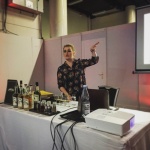 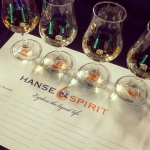 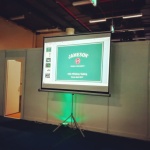