Glengyle Distillery was founded in the second half of the 19th century, flourishing at first. But from 1910 on, times became bleaker. On the one hand, Scotland got into economic trouble. On the other hand, one of the main consumers of Scotch whisky, the United States, was dispensed as a potential buyer due to the Prohibition. For these reasons, Glengyle Distillery closed its doors in 1925. After two failed attempts to whip the distillery in into shape again, production was finally restarted almost 80 years later. In 2004, Glengyle Distillery was the first Scottish distillery of the century to reopen its doors. After different bottlings from their ”Work in Progress“ series, which included whiskies matured in bourbon and sherry casks, the 12yo was launched in 2016. It contains 70% whisky matured in bourbon casks and 30% whisky matured in sherry casks. But why is this whisky called Kilkerran and not Glengyle? Actually, there are two reasons for this. First, there already exists a whisky called Glengyle, which is a blended Highland malt. Second, it is uncommon to name a whisky after a glen in Campbeltown – a tradition the people at Glengyle Distillery wanted to keep alive. Anyway. No matter how the whisky is labelled, it is really complex for a 12 years old and – most important of all – extremely delicious!

Eye: Yellow and bronze-colored amber.
Nose: When you first sniff the whisky, you will find very dominant oak notes. After some time, there will also appear herbs, honey and sugary notes. The latter might be waffles with sugar foam, which we call “Helgoländer Waffeln” in Germany. Additionally, you might also find citrus and cherry in there as well as smoky notes in the back. This whisky is really a diversified and complex.
Palate: The first sip is sweet and peppery. Lots of vanilla and more citrus notes than there were in the nose. Then there are also shortbread and some licorice. The more time this whisky gets in the glass, the more flavors appear. As expected from the nose, there are slight smoky notes in the background.
Finish: A long finish with citrus and pepper. You might even feel a little saltiness. 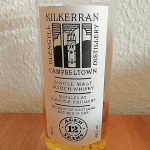 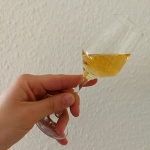 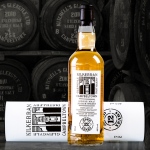