Cadenhead’s is Scotland’s oldest independent bottler of whisky. Founded in Aberdeen in 1842, they celebrate their 175th anniversary this year. In the light of this event, they have released ten very special bottlings chosen by the employees of their nine shops across Europe. Each of their shops received the same set of blind samples from which they were then encouraged to pick their personal favourite. Obviously, they did not receive any information on these samples at all. Since they age, distillery and wood were a complete mystery to them, the employees of the differing Cadenhead’s shops chose the whisky that was about to become their shop bottling only with their noses and their tongues. The staff of Cadenhead’s Whisky Market in Berlin chose an Arran distilled in 1995 – the very year in which Arran Distillery kicked off their production. This probably makes the Arran 21yo by Cadenhead’s Berlin one of the oldest Arrans on the market today.

Eye: A mixture of light brown and gold.
Nose: Do you know Reese’s Peanut Butter Cups? If they launched a salty, alcoholic version of their sweets, it would smell exactly like this. Peanut butter, milky chocolate, salt and honey sweetness.
Palate: Not as sweet as I expected after nosing it. Salty, buttery and malty notes combined with hazelnuts. You might even discover a bit of rum and raisins.
Finish: Long, smooth and slightly bitter with pleasant notes of nuts, butter and harsh yellow fruits. 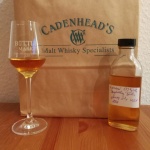