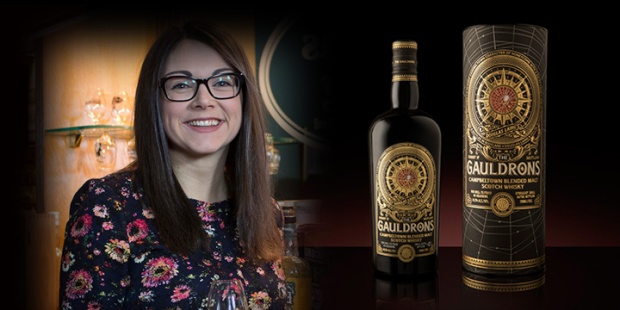 In mid-September, Douglas Laing surprised the whisky world with the reveal of The Gauldrons, the long-awaited Campbeltown expression of their popular blended malt range called Remarkable Regional Malts. Not only have Glasgow’s Finest now conquered the full whisky map of Scotland, but also is their latest release – as was to be expected – a real eyecatcher that tells a captivating story based on ancient Scottish legend. In our interview, the company’s Marketing Manager Jenny Rogerson sheds light on a variety of topics, questions and mysteries connected to The Gauldrons. Have fun reading this creepy ‘n crawly piece, fellow drammers!

BarleyMania: The Remarkable Regional Malts have recently receive their long-awaited Campbeltown edition. How does it feel to know that your signature range of blended malts has now conquered the entire whisky map of Scotland?

Jenny Rogerson: When we launched Big Peat back in 2009, the first of what would later become the Remarkable Regional Malts, we had no plans to eventually “conquer the entire whisky map of Scotland”, but it’s incredible to now have a comprehensive range to offer to the market. The Epicurean from the Lowlands, Timorous Beastie from the Highlands, Scallywag from Speyside, Big Peat from Islay and now The Gauldrons from Campbeltown, collectively offer “the Ultimate Distillation of Scotland’s Malt Whisky regions” and uniquely deliver a tour of Scotland in 6 bottles!

BM: There are currently 3 operating distilleries in Campbeltown, namely Springbank (which also produces Hazelburn and Longrow), Glengyle (home of Kilkerran) and Glen Scotia. So, the number of malts from which you can produce The Gauldrons is rather limited. What challenges does this situation present you with? And does the involvement of such a comparatively small amount of parties also have advantages for you?

JR: Indeed – it’s somewhat bizarre to think that Campbeltown, now with just three active distilleries, was once Scotland’s whisky capital! This ultimately means that each batch of The Gauldrons will be very small, and batches will be few and far between, so the product will never be as readily available as some of the others in the Remarkable Malts family. It’s exciting for us, as we plan to vary the recipe each time we bottle, and the batch number will feature on the packaging, which we’ve never done before. So, we hope to see consumers comparing and contrasting each outturn and helping to influence the future of the brand.

BM: True to the concept of the Remarkable Regional Malts, The Gauldrons comes with a beautiful design and elaborate lore. The malt recites an old Scottish legend according to which a fateful encounter with a spider in a cave near Campbeltown inspired Robert the Bruce to keep waging war against the English and ultimately overcoming them after many preceding defeats. Why does this ancient tale provide the perfect back story for your whisky?

JR: The Gauldrons is named after the eponymous set of caves on Campbeltown’s west shores, the iconic location where Robert the Bruce witnessed a spider, with great difficulty but great determination, try, try and try again to build its web. Legend has it that it was the tenacity of the spider that inspired Scotland’s king to reignite his plight against the enemy, and ultimately to never give up. The Gauldrons Malt Whisky pays homage to its Campbeltown roots, where myths and legends are aplenty, and the atmosphere is thick with history.

BM: The packaging of The Gauldrons is darker and more eerie than that of the other 5 Remarkable Regional Malts. In combination with the launch in October, this makes The Gauldrons the perfect fit for Halloween! So your Campbeltown malt seems to be not only a regional but also a seasonal whisky, right?

JR: Absolutely! We first visited Campbeltown on a fact-finding mission almost two years ago, so this new release has been a long time in the making, but its October launch is no coincidence. The dark and eerie packaging certainly does make it particularly appropriate around Halloween, though it is not planned to be an annual release around this time of year. The timing of Batch 2 is not yet confirmed… watch this space!

BM: Quick question before we come to an end. How will the Douglas Laing folks celebrate Halloween this year?

JR: We’re planning a The Gauldrons-themed Halloween party at Douglas Laing HQ! The first official tasting of The Gauldrons for the Douglas Laing team will be the highlight of our day, as part of a Remarkable Regional Malts masterclass hosted by Jan Beckers, our Global Malt Ambassador. Scallywag already his has Dracula costume prepared! 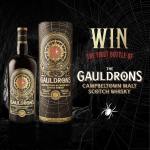 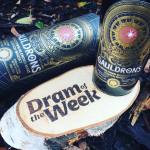 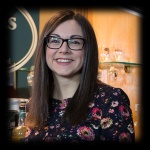 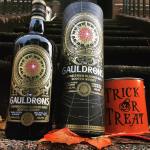