With ingenuity being quite a magical trait, it often takes no more than a bright idea to make our lives a little easier. Luckily, the fine lassies and lads of The Scotch Malt Whisky Society, The TWO Staves and Whisky & Vinyl had such bright ideas, when they conceived the three whisky gadgets that I would like to show to you in the course of this article. While their concepts are simple and their prices are cheap (two of ‘em are given away for free and the last one is sold for just a few bucks), their usefulness is not to be disprized…

Savoring a whisky is easy. But nailing down its different aromas and flavors is not. Quite often when you brood over a dram, you sense a myriad of things without being able to name more than one or two of them. To kick-start your imagination in such situations, the Scotch Malt Whisky Society created a tasting aid called Think Flavour. For each of the twelve classes the Society uses to classify its whiskies, this handy pocket register lists up to 15 buzz words. Some of them are pretty common, like “Apricot” or “Apple pie” in the “Sweet, Fruity & Mellow” category. But others are more unique, like “Tarry ropes” or “Harbour walls” in the “Oily & Coastal” repository. The next time you sit down to describe a dram, make sure you have this awesome thingie – which the Society hands out for free at fairs and other events – right next to you. Your tasting notes will surely benefit from it!

Let’s admit it. We all love business cards. We love receiving them. We love producing them. And we love exchanging them. But once we are home and have added our new contacts on Facebook or LinkedIn, there is little use for the original cards anymore. Unless we are talking about the ones from Andi and David of Whisky & Vinyl. Made from stiff cardboard and punched out in the form of a square with rounded edges, their business cards make excellent Glencairn caps! So when your buddy tells you that he will arrive at your place half an hour late, just place your Whisky & Vinyl business cards on the already-poured glasses to make sure you can both experience the dram the way it came out of the bottle. Of course, a lot of whiskies benefit from getting some air. But it is always most fun to follow that process from start to finish rather than skipping the (very fascinating) breathing part… 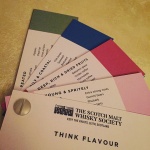 Think Flavor by The SMWS, pt.1 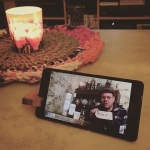 SmartStave by The TWO Staves, pt.1 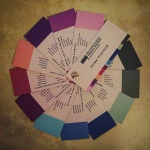 Think Flavor by The SMWS, pt.2

SmartStave by The TWO Staves, pt.2