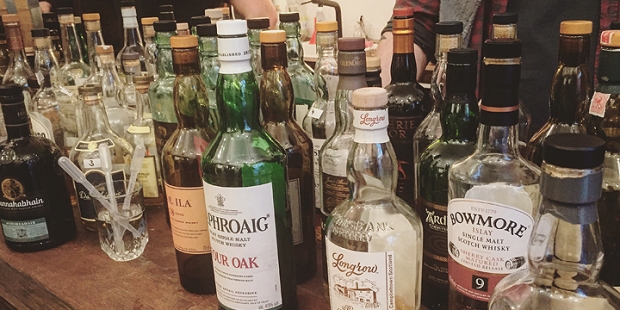 Every end is also a beginning. So when his contract with Cadenhead’s ended after 13 years, whisky vet Klaus Pinkernell looked forward rather than back. And not even half a year later, he opened a new store called Pinkernell’s Whisky Market in Berlin-Friedrichshain. Besides a lot of the old inventory, he also took over a particularly cool tradition of his, namely the “Day Of The 100 Open Bottles”. As I don’t get to visit our capital that often, I never attended any of the previous happenings. But thanks to an invitation by my pal Andi, who is the branch manager of Pinkernell’s Whisky Market in Berlin as well as a co-founder of the kick-ass Whisky & Vinyl blog, I got to take part in the latest iteration of the cult event.

When I arrived at the venue at 2pm on a Saturday, the place was already packed with drammers. True to the day’s motto, there were open bottles – mostly from fairs and tastings – everywhere! Next to the entrance you got rum, bourbon and Irish whiskey. At the counter, you got all kinds of official distillery bottlings as well as single casks by The Whisky Chamber. In the storage, you got dozens of leftovers from the Cadenhead’s days. And in the showroom, you got select products from German indie bottler Jack Wiebers and English whisky company Claxton’s. If you wanted to try a pour, all you had to do was tell a staff member and they gladly filled your glass. No wonder, Berlin’s whisky-lovin’ folks are mighty fond of this simple but wonderful concept!

Of the many drams I had, most came from Claxton’s. As the Yorkshire-based family business did not have a distributor on the German market before, I had not really taken notice of them in the last years. But now that Pinkernell’s Whisky Market imports their splendid single cask releases, I have no doubt that they will quickly make a name for themselves among German whisky enthusiasts. For the event, their Commercial Director Adrian flew over from the UK. He is a really nice chap, who had a lot of interesting stories to share on both the company in general and their bottlings in particular. As we chatted, he poured me one amazing sip after another. My faves were a 24-year-old Highlands jewel by Tullibardine and a 10-year-old Island malt from an undisclosed production unit on Orkney. In the first, a yellow fruit basket mingled with vintage study notes (leather, parchment, tobacco) in a most fascinating way! And in the latter, the high ABV of 63 per cent and the untamed maritime character unleashed a real storm tide in the mouth! At 62 Euro, the Orkney one was almost a steal, so I couldn’t help but bring a full bottle of it home.

Right next to Adrian, Jack of Jack Wiebers Whisky World served a selection of his latest releases. As his focus lay mostly on smoky sips, I popped in on him towards the end of the afternoon to finish the “Day Of the 100 Open Bottles” with the obligatory dose of peat. I got it from the latest Classic of Islay bottling, which I tried both in drinking strength and cask strength. Both of these sherry-matured spirits were really tasty and offered some insane value for money! With hindsight, I wish that I had also tried the Glentauchers 9yo that Jack had brought along. After all, it was easily one of the most beautiful bottles in the entire shop. Just check out the pic in the gallery below and you know what I mean!

For obvious reasons, it would be pretty foolish not to choose from over three dozen open Cadenhead’s bottles if given the chance. As Klaus explained, all the expressions he had on offer were unpeated and drawn from ex-bourbon casks. The other ones sell out so quickly that there are normally no bottles left to be served at an event like this. Still, the range he had lined up in front of him was very impressive, with most whiskies being of respectable age. Eager to try something out of the ordinary, I chose a 26-year-old corn whisky from Canada and a 28-year-old grain from the closed Caledonian Distillery in the Lowlands. And since I just could not get enough, I also returned for a fruity Auchentoshan 17yo as well as a robust Glen Scotia 25yo.

In the course of the four hours I spent at Pinkernell’s Whisky Market, I got to try so many awesome drams, talk to so many nice people and experience such a fantastic time that not even my team’s painful loss against our arch-rivals from Bremen could spoil my mood. Conclusively, I want to thank everyone involved for their hospitality, generosity and friendliness. And if any of you guys happen to be in Berlin, make sure you arrange your schedule in a way that leaves time for a visit to Boxhagener Straße 36 in the district of Friedrichshain (near Ostkreuz station). Even when Klaus and his team are not having an open bottle event, visiting their cozy store and checking out their richly filled shelves is highly recommended. 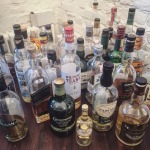 The team in action 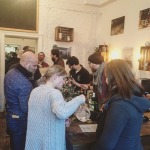 Tullibardine 24yo by Claxton’s 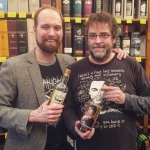 Glentauchers 9yo by Jack Wievers