Labeled “The Maritime Malt” that was “Born in the Port of Whick”, Old Pulteney is a prime example of a salty, sea-shaped Scotch whisky. And despite the fact that all of the distillery’s bottlings are usually held in high esteem by fans of the afore-mentioned flavor profile, the popular 12 Years Old could easily be called the leader of the pack. Whenever drammers talk about briny bevvies, chances are high that said sip will get a mention at one point or another throughout the conversation. And when the close-to-the-sea Highlands unit recently overhauled its core range, the 12 Years Old was the only whisky that got a make-over on the outside, but remained untouched on the inside. Apparently, the fine folks at the distillery knew very well that the malt maniacs out there would not be rather irritated if a total classic like the Old Pulteney 12 got altered or – I hardly dare to utter it aloud – replaced! So cheers for making this evergreen different and keeping it unchanged at the same time, fellas!

Eye: Apple juice.
Nose: A soft nose that opens with fresh green apple and unripe kiwi, followed by warm lemon cake and roasted almonds. A long, deep and patient sniff also produces super-sweet notes of pineapple-flavored gummi bears. And around it all, there is a dense cloud of salty sea spray.
Palate: Again, we get green fruits and intense salt as the dominating flavors. Vanilla and citrus are part of the mix as well. Somewhat uncommon for a coastal malt, the spirit does not feel thick and oily in the mouth, but light and fluent.
Finish: The twelver’s aftertaste does not last too long. While it fades, the whisky shifts from sweet n’ salty to savory n’ slightly bitter. Pleasant notes of burnt sugar, salted caramel and crunchy apples make you want to take another sip as soon as the previous one is gone. 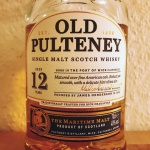 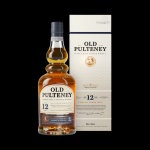