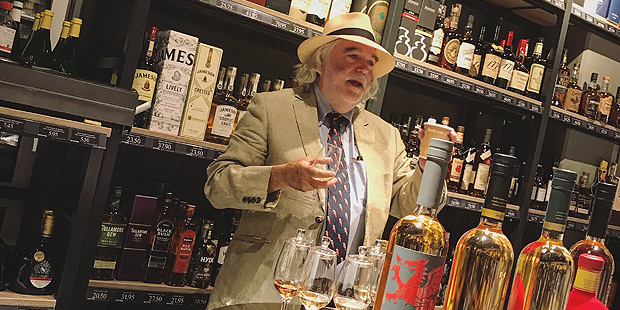 “Be honest, guys. How many of you would have bought a ticket for tonight’s event if you had known before that we would not actually drink any drams?” – When Whisky Bible author Jim Murray asked his guests this question at the beginning of his Penderyn tasting in Siek near Hamburg, more than just a few question marks appeared on the faces of the attendees. But the seasoned industry veteran, who visited his first distillery in the mid-70s and published his first whisky book in the early 90s, was dead serious. He had not come to the premises of Weinquelle Lühmann to knock back six glasses of high-percentage spirit with us. He had come there to show us how to professionally taste, analyze and understand whisky using his very own “Murray Method”. Against this background, the title of this article is a bit misleading. Cause strictly speaking, we had not experienced a Penderyn tasting with Jim Murray, but a Jim Murray tasting with Penderyn. Still, we also got to learn a lot about Wales’ only operating distillery along the way…

The afore-mentioned “Murray Method” is a special degustation technique (or should I rather say ritual?) that Jim Murray uses for every single whisky he includes in his annual Whisky Bible. As the 60-year-old Brit reviews as much as 1,200 different drams per year, he can understandably not swallow all of them down. If he did, he might still be accurate on the first one or two whiskies of the day. But the follow-up pours would not be given a fair chance. Thus, he developed a unique tasting procedure that allows him to “listen to the whisky’s story” and “translate the liquid in the glass into English”. Sounds like mumbo-jumbo? Maybe… but when we gave it a shot, it worked like a charm!

The “Murray Method” goes as follows: First, you quickly eye the liquid. Second, you smell it and rinse your mouth with it. Third, you hold the glass so that the palm of your one hand cradles it and warms the spirit it contains, while your other hand covers it. Jim Murray calls this “making love to your whisky”. Throughout the evening, he repeatedly reminded the male members of the audience to hold the glass close to the chest during this phase of the degustation; not the crotch. Once the whisky got warmed up, you draw it to your nostrils and nose it three times. Then you take a big sip of it and let it coat your oral cavity, both with the mouth closed and opened. After a couple of seconds, you unleash it into a spit bucket (we used paper cups as a substitute). With your eyes closed, you then concentrate on the sensations you felt before as well as the aftertaste you are experiencing now. When the effect of the whisky has completely faded, you repeat the whole procedure. All in all, you give it two to four shots. And during every step, you try to make out how the whisky changed, evolved and improved.

In his analysis of the savored whisky, the first thing Jim Murray looks for are blemishes. Are there any off-notes? Are all scents and flavors in balance? Is the spirit well-crafted? In regard to Penderyn, all of these questions could easily be answered in the distillate’s favor. Since it produces a very clean spirit and matures it amidst top-quality wood, the Welsh production unit has all important boxes checked. But what else could be said about the different Penderyn expressions in front of us? To get the gist of it, Mr. Murray suggested to answer a selection of simple questions: Does the whisky feel light, medium or heavy in the mouth? Is it of fruity, peaty or spicy character? What basic scents and tastes does it offer? How does our sensation change when we savor it again…? Sure, degusting a dram in accordance with the “Murray Method” takes quite a lot of time. But you will ultimately be rewarded with a whole lot of insights and sensations that you would otherwise most likely have missed!

As interesting and inspiring as the “Murray Method” has been, I will not apply it to every dram I drink from now on. On the one hand, I enjoy being tipsy too much to spit out most of the whisky I taste. And on the other hand, I am also not patient enough to brood over every glass I pour myself for 20 minutes and more. So I guess I will continue drinking the bulk of my booze the way I did before. Still, I am sure that I will return to the “Murray Method” occasionally, be it simply for kicks and giggles or to get the very most out of a special sip – like the shy and subtle yet super-rewarding Penderyn Bryn Terfel I took home from the tasting!

In the first paragraph, I wrote that many of the attendees (me included) were a little confused at the beginning of evening. And while the out-of-the-ordinary nature of the event still left us a wee bit puzzled in the end, we all agreed that this was a highly unusual but utterly enjoyable experience. Having dedicated more than 40 years of his life to whisky, Jim Murray had so much knowledge to share, so many stories to tell and so much advice to give that we all hung on his every word. And treating us to half a dozen Penderyn pours, he tought us his technique using six immensely tasty examples. Thanks a million to everyone at Penderyn Distillery, Schlumberger – A Dram For Everyone and Weinquelle Lühmann as well as the man himself for making this wonderful evening possible! In regard its educational value and jocularity, it was neither “light” nor “medium” nor “medium-light”, but massively “heavy”! 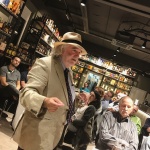 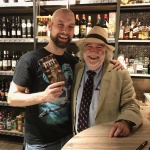 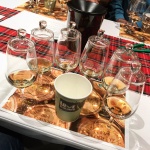 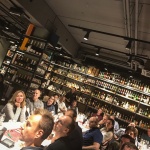 Bosse – The only dog to ever attend a JM tating