Trick question: What is a better evening activity than attending an awesome whisky tasting? Of course, attending two awesome whisky tastings! That is what Distell’s “double headliner tour” in Hamburg was all about. Hosted by Chris and Stephan of Hanse Malt, the 3-hour experience started with a Bain’s deconstruction masterclass with WWA’s “Icons of Whisky” honoree Andy Watts and ended with a Deanston prestige tasting with Brand Ambassador extraordinaire Scott Martin. While the event produced enough material for three or four blog posts, I will try to squeeze as much of it as possible into one article. So let’s cut directly to the chase!

Andy’s 35-year career in the spirits industry came to be by accident. If it had been up to young Mr. Watts, he would have lived the glamorous life of a professional footballer. When it became clear that this would not be an option, he chose the second best alternative: To play cricket for a living. Gladly (with hindsight), the English team he had signed with dropped him in favor of a new star player. Otherwise, he might never have gotten into whisky making. And that would have been quite a pity for us thirsty lot!

After earning his spurs over a five-year “exchange” period on site at Glen Garioch, Auchentoshan and Bowmore, Andy moved to South Africa with his mission: To turn the long-serving James Sedgwick Distillery, which previously specialized in brandy, into a whisky production site. For 25 years, Andy ran James Sedgwick as Distillery Manager, before he shifted to his current position as Head of Whisky Excellence. With Bain’s, the seasoned industry veteran followed a rather simple formula: If 90 per cent of all consumed whiskies are blends and if 70 per cent of each blend is grain, the grain had better be good! Thus, he and his team went on to produce a smooth and savory single grain whisky of such high quality that it could easily hold its ground on its own. It was not without a flare of pride in his eyes that Andy told us of Bain’s pioneering role in making grain whisky a commercially available spirit (rather than a mere supplement for blends).

The deconstruction part of the masterclass started with a dram of Bain’s new make, which was surprisingly soft and palatable. “I’ve had vodkas that were less good than this,” Andy chaffed. We then tried a 3-year-old grain that was specifically produced to go into blends, such as Three Ships. This one was rather unspectacular… albeit on purpose. According to its maker, the aim of such a spirit is to serve as a canvas for the malts in the recipe to shine on. The third glass contained a 3-year-old Bain’s made for commercial release (but never was!). It already had many of the qualities of the final product – which we tried last – but was not yet there. When Andy first arrived at this stage, he decided to give the whisky the final polishing by re-vatting it in new American oak casks for another two years. This rounded off the edges and added more depth and flavor, ultimately producing the delightful mix of sweet, fruity, spicy, savory and “cocoa powder-y” notes that Bain’s is cherished for.

Once the echo of the last sip had silenced in our mouths, a short break followed during which the drams for the Deanston tasting got prepared. Andy then sat down in the back of the room, while his colleague Scott stepped forth. Right from the start it was clear that the cheery Scotsman was not only a knowledgeable whisky expert, but also a born entertainer. As he lead us through the six-piece menu, he repeatedly involved the audience and cracked jokes. “Let’s have fun and drink some whisky while we’re at it”, Scott said at the beginning of the degustation. A proposal everyone was more than happy to follow.

We began with the fresh and spicy Virgin Oak, which marked the only NAS bottling in the selection. But don’t let the lack of an age statement cloud your judgement. This was a great pour that perfectly illustrated Deanston’s light and fresh house style. Next up was the distillery’s signature 12yo. Like the 18yo that followed later, it was fully matured in ex-bourbon casks. It offered vanilla, honey and raisins as well as lemons, oranges and peaches. It also seemed somewhat grassy. In regard to their overall character, the 12yo and the 18yo are quite similar to each other, with the older one naturally being a bit more complex and refined. The 15yo Organic was one of my personal faves. This elegant Highlands malt was more lemon-y than the rest of the line-up. It appeared to be rather subtle and shy at first, but opened up beautifully when given some time.

Whereas the initial four drams all sported Deanston’s signature ABV of 46.3 per cent, the last two whiskies were bottled at cask strength. The fully Oloroso-matured 20yo knocked it out of the park. I found it to be immensely complex, highly interesting and utterly unique. It brimmed with dried fruits, ground coffee beans, crumbled gingerbread, candied almonds and toasted oak. If they had offered full bottles at the tasting, I would have turned a blind eye on the stiff price and scored a sample of this beauty. The “distillery only” 14yo Spanish Oak was superb as well. Clocking in at almost 60 per cent, it constituted a strong and sturdy malt with a surprisingly sweet and delicate finish. Once we had savored it, the official part of the evening was over. But we did not leave straight away. As is usually the case at a Hanse Malt event, the good-humored crowd stayed on to mingle, chatter, laugh, talk shop and enjoy a free refill or two. 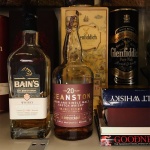 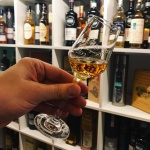 In the glass (Deanston) 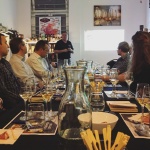 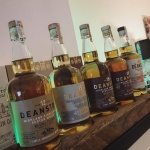 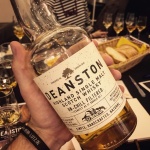