Last month, I reviewed the four members of North Star’s new Millennial Range here on my blog. Now, I follow up with four other bottlings from Series 006 – which will soon make way for Series 007 to become the most recent batch of North Star releases. Before this happens, let me tell you a bit more about some of the exquisite Series 006 whiskies. They include rarities like a 28-year-old Lowlands jewel from Bladnoch and a 36-year-old Speyide oldtimer from Miltonduff as well as more affordable treats like a chocolate bomb from Tobermory and a red wine-finished Glentauchers. “Interesting,” you think? “Oh yes,” I say!

While independent Bladnochs are not impossible to find, they are a seldom sight. Thanks to this rare bottling from North Star, I now got to try such a whisky from the long-serving Lowlands unit. After its distillation in 1990, this drop was filled into a refill barrel. It remained in there for almost three decades. Color-wise, the wood did not have a big influence on the liquid. But in regard to scent and taste, it brought out many lovely qualities. The nose is fruity, fresh and full with a lot of citrus and passion fruit. A fine layer of saw dust tells of the spirit’s age, while the aroma of cut straw hints at its origin. The first sip is light and almost shy. But the longer the whisky stays in the mouth, the more blossoms out. It offers wild honey, citrus zest, apple compote, milk chocolate, buttered toast, icing sugar and white wine. The aftertaste is round, soft and half-long. It is full of yellow fruits like apricots, mirabelles and wild plums. It also has some grass and cereal notes further back. Sure, this is a great piece of Lowlands history. But more importantly, it is a thoroughly awesome dram!

Miltonduff is a distillery from which I did not have too many drams before. And I never had one that old and rare… it is not every day that I get to drink a Speysider distilled in the early 80s. So let’s see what it is like. The bouquet of this 36-year-old whisky from a refill hogshead is immensely spicy. I get cinnamon and star anis laid out on a spread of shortcrust pastry and stewed apples. The first sip is rather bitter with a lot of dark chocolate, grapefruit, tree bark and black tea. After a short while, ginger root and orange zest chime in. And so does a sweetening ounce of brown sugar. The finish is lengthy and softening. Towards the end, both the spicy and the bitter notes fade. They make way for dried apple chips, malt sugar cough drops and slightly burned vanilla pudding. Admittedly, this is quite a demanding pour – especially the initial bitterness will not be for everybody. This being said, it is this “edginess” that makes the malt both interesting and unique. It is like your grandpa, who seems a little odd at times, but has memorable stories to tell. So sit back and indulge in the whisky’s words. It has a lot to say.

Sherry wood can bring out many lovely qualities in a whisky, from a distinct nuttiness to an intense fruitiness to a pronounced spiciness. However, this Tobermory 10yo from a sherry butt has yet another flavor profile. It brims with chocolate! In the nose, Tobermory’s fresh house style (pear, ginger) mingles with heavier notes from the cask (hazelnut, burnt sugar). Typical for an islander, the mouthfeel is a bit oily and the spirit carries some weight. It is chocolatey, nutty, orangey and very savory. The creamy cocoa finish has a peppery edge. And it is looong!

This 10-year-old Speysider from Glentauchers Distillery got its reddish-golden color from a primary maturation in a refill hogshead followed by a finish in a French red wine barrique (an oak barrel containing approx. 225 litres). When sniffed, it opens with fruity and sweetish fragrances. I get juicy red currants, dried rosehips, squeezed oranges and freshly opened pomegranates. There is also a dusty “study” note, which I suppose to come from the red wine-soaked wood. The palate is lovely. Despite the high ABV, the whisky feels smooth and velvety. It offers Mon Cherry chocolate, blood oranges and strawberry punch. The good, lasting aftertaste rounds the dram off with red fruits, berries and grapes. I bet this was already a great drop when it left the hogshead; but the additional time in the red wine barrique has made it even greater. 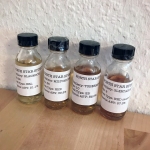 The dram (Miltonduff 36yo) 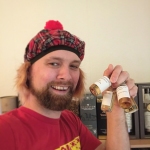 Promo shot of Bladnoch 28yo (taken from Facebook.com/NorthStarWhisky) 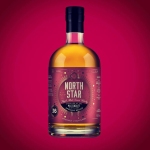 Promo shot of Miltonduff 36yo (taken from Facebook.com/NorthStarWhisky)

Promo shot of Tobermory 10yo (taken from Facebook.com/NorthStarWhisky) 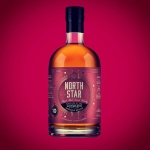 Promo shot of Glentauchers 10yo (taken from Facebook.com/NorthStarWhisky)