Hamburg is known for many things. Sunny days and mild evenings in spring are not among them. Still, the weather is traditionally glorious on one particular Sunday in June, when Borco-Marken-Import’s annual whisky festival is on. Someone up there in the clouds must like this jolly get-together quite a bit. And rightfully so! The event offers everything you need for a good time: a spectacular setting, a chilled atmosphere, a good-humored crowd, a colorful supporting program and, of course, gorgeous whisky. In the past, the latter came exclusively from Jura distillery. But this year, Borco-Marken-Import re-imagined the event under the World of Whisky moniker and added various new brands to the roster. Besides Jura, Dalmore, Glengoyne and Fettercairn from Scotland, the line-up also included Teeling from Ireland, Lot 40 from Canada, Evan Williams from the US and Nikka from Japan. A real World of Whisky, for sure!

When I arrived at the location (an old crane boat at anchor in the museum harbor Oevelgönne), I was greeted by the beautiful music of local songwriter Marten Pulmer. After saying “hi” to a couple of friends, I headed over to the bar for a first drink. The selection was plentiful and the prices were incredible – every dram cost 2 Euro, every cocktail 3 Euro. I started with Dalmore 15 Years Old and continued with Jura 18yo One For You, followed by Teeling 15yo Revival. An exceptional kick-off trio that paved the way for other top-class drams. When the bar staff opened the 21-year-old and 25-year-old luxury bottlings from Glengoyne at a later point, I had to try them as well. Stellar stuff!

Earlier in the day, I also had Glengoyne’s crisp 10yo and complex 18yo plus the latest batch of their able-bodied Cask Strength. I did not order them at the bar though. I drank them on a boat while doing a harbor tour! To offer the World Of Whisky crowd yet another special experience, Borco-Marken-Import chartered two vintage ships and used them as tasting sites. On board, renowned presenters like Michael Lutz (Herr Lutz), Gearoid O’Callaghan (The Whisky Jack) or Mario Kappes (Borco) introduced their guests to the different brands from the Borco portfolio. The Glengoyne degustation was hosted by Dram Mor’s Kenny Macdonald, a jaunty Scotsman with a deep whisky knowledge and a real talent for bringing his stories across. His session was packed with over 20 attendees, all of whom listened, learned laughed and reveled aplenty during the boozy boat cruise.

Other fun parts of the World of Whisky festival were two maritime food pairings (Teeling with herring and Glengoyne with oysters), a shanty choir performance and my repeated visits to the Ratsherrn counter, where I grabbed a cool beer from time to time. I found especially the light and easy-going Session Pilsener to be a good, modest companion to the delicate drams I sipped in parallel. In the bow of the crane boat, some of my friends were also happy to receive a new hair cut from a barber, while other visitors got free ink from a tattoo artist. The agenda was broad and diverting. In the end, it did not matter whether you preferred your whisky neat or mixed, whether you were in for two drams or ten, whether you came primarily for the drinks or the side events. If you attended Borco-Marken-Import’s wonderful World of Whisky festival, you will certainly have had an amazing time! 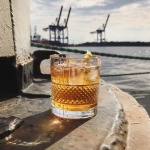 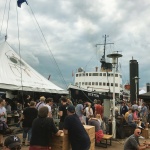 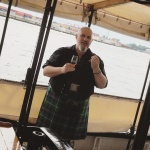 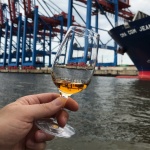 In the glass (Glengoyne 18yo) 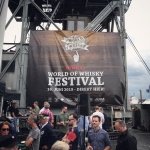 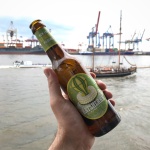 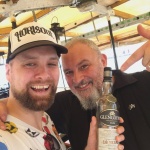 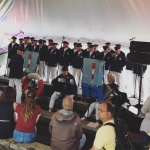 The shanty choir on stage 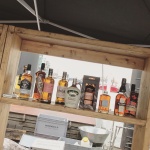