Normally, Gerd Schmerschneider makes a living as the German importer of brands like Port Askaig, The English Whisky Company and others. During his traditional pre-Christmas tasting at Christiansen’s on November 4, however, he took over another profession – namely that of myth buster! The tools of his trade: the new “Myths & Legends” whiskies from Compass Box, another illustrious listing in the release portfolio of Gerd’s company Prineus GmbH. Each of the three “Myths & Legends” expressions was created to debunk a common whisky misconception. Which misbeliefs these are and what Compass Box did to unmask them, I will tell you now.

Whisky myth number one is this: The art of blending has no part in the creation of a single malt. Some people assume this, because they confuse the terms single malt and single cask. Whereas a single cask is indeed not blended (after all, they it is drawn from one source only), a single malt is created the same way as a blend (only that the mingled casks come from one distillery instead of several). To highlight this, Compass Box’s whisky makers Jill Boyd and James Saxon created Myths & Legends I by blending two very different charges of casks – both of which came from Balblair distillery in the Highlands. The result of the marriage of these barrels is the first-ever single malt whisky release in Compass Box’s close-to 20-year history and the kick-off dram of our tasting. It had a massive bouquet (green pear, vanilla crescents, buttered popcorn), an invigorating palate (fresh lemon, juicy pineapple, sliced ginger) and a floral finish (blossoming clover, wild honey, sweet vanilla). Great stuff!

Another industry legend suggests that each of Scotland’s five whisky regions has its distinct, unmistakable style. Myths & Legends II attempts to rectify this view. Blended from a broad variety of Glen Elgin casks, this whisky – which also classifies as a single malt – is not a typical Speysider by any means. Instead of being heavy and spicy with an abundance of ripe fruits, it is light and fresh with a lot of tropical flavors. When I drank it, I discovered passion fruits and strawberries with icing sugar as well as kiwis, grapes, berries and banana milk. The exotic, refreshing and electrifying character made Myths & Legends II a perfect summer’s whisky… but it also tasted lovely on a mild evening in winter.

The final instalment of the series, Myths & Legends III, showed us that there is no such thing as a whisky too precious to be put into a blend. To proof this point, Compass Box only used well-aged casks from Caol Ila (Islay), Highland Park (Orkney) and Glen Elgin (Speyside) for it. The youngest malt in the recipe is 15 years old, while the oldest is 23 years old. Some of you might ask themselves: “Why do they put such special malts into a blend”? To this, Compass Box would answer: “To bring out the best in them”! Myths & Legends III impressed me with its opulence, versatility and distinct character. The malt from Glen Elgin laid a delicate base to which the whiskies from Highland Park and Caol Ila added sturdiness, edginess and a thin, fleeting smokiness.

After the three “Myths & Legends” expressions – which look absolutely fabulous together, by the way – we sipped yet another new Compass Box release: No Name 2. According to Gerd, the folks at Compass Box chose the “No Name” moniker because they thought: “These bottlings won’t need no fancy name to win people over. The whiskies will speak for themselves”. Hell yes, they do! The recipe of No Name 2 includes old Caol Ila and Talisker plus a bit of Clynelish to round off the edges. It has a sophisticated smokiness and a baffling complexity. During the degustation, my nostrils got filled with pork roast with crackling, autumn leaves and marzipan. My mouth got coated with dried apricots, puff pastry and salted nuts and raisins. The long aftertaste was sweet, blazing and slightly peaty. In addition to the tasting bottle, Gerd brought along four other copies of No Name 2. The guests liked this whisky so much that they literally tore them from his hands!

Besides the Compass Box quartet, the line up of this year’s pre-Christmas tasting at Christiansen’s also included a orange- and chocolate-flavored gin tonic made with Brecon Gin from Penderyn Distillery and three rare single cask whiskies: a Dailuaine 19yo from Grindlay’s, a Ben Nevis 18yo from Grindlay’s and a Bruichladdich 25yo from Single Malts of Scotland. Since I did not want to end up too tipsy, I only sipped each of them once. The rest went into sample bottles. For this reason – and to keep this blog post’s story straight – I only focused on my spirituous journey into of realm of myths and legends here. I certainly had a lot of fun on that trip. And I hope you enjoyed reading about it, too! 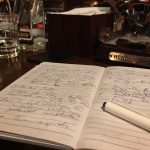 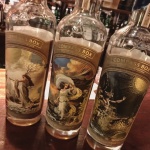 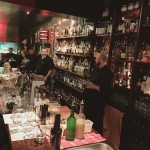 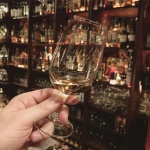 In the glass (Myths & Legends II)