Finally! A real tasting … again! Due to the coronavirus’ sudden interference, I had not attended any dramming events since mid-February. Thankfully, this lean period has come to an end now. While enjoying a short get-away on the island of Helgoland, I participated in one of Heiner “Helgoheiner” Stepper’s fabulous whisky tastings. During the holiday season, these high-percentage gatherings take place every Thursday at 4.30 pm in front of Heiner’s Duty Free Shop. The line-up usually consists of six top-class whiskies from the store’s well-sorted goods shelves. When I was there, me and the other guests sipped a fine selection of drams covering an age range from NAS to 21-year-old. As the common corona regulations were fully effective at the time of the tasting, we had to abide by a couple of extra rules. But that was not a big deal at all. Everybody was happy to keep a safety distance and remain seated until the event was over – and thus we were in for a cracking whisky experience!

Suitable for the bright and warm weather, we started with a perfect summer’s dram. The Glen Keith 21 Years Old was matured in both barrels and butts. Its elegant nose offered apple puree, citrus zest and mango chunks alongside soft, chewy toffee. The complexion was lean and silken. On the palate and in the finish, I made out all kinds of summerly flavors: white chocolate, vanilla crescents, passion fruits and pears as well as a thin, fleeting breeze of smoke. Given the fact that this whisky is unpeated, the latter surprised me a little. But it complemented the other notes nicely and gave this lovely (yet expensive) Speysider some extra depth and appeal. We continued with another fresh and fruity malt, namely a Tullibardine 2007 from Signatory Vintage. Whereas its softened aromas were more on the reserved side, its flavors were big. The whisky brimmed with kiwis, lemons, gooseberries, puff pastry and mint leaves. Furthermore, a spoonful of white pepper and a pinch of salt added an accentuating spiciness. Yummie!

With dram number three, things got darker. The new 15 Years Old from The GlenAllachie was composed from PX and Oloroso casks of varying sizes. It smelled of red wine, dark grapes, soft cherries, English sweets and foamy milk coffee. The spirit weighed heavy on the tongue and felt wonderfully creamy. Its most prominent flavors were those of strawberries, cassis, dextrose, baked plums and dark chocolate. In the course of the long finish, the whisky developed a somewhat dusty quality that reminded me of old, musty cushions. While The GlenAllachie’s opulent 15 Years Old was amazing on its own, it also paired beautifully with the chocolate that Heiner served in between the tasting rounds. In the final poll, the guests declared it their favorite dram of the evening – and rightfully so! Next up was a German malt from Hammerschiede distillery. Recently, they rebranded their whisky line as Elsburn; but this expression was still bottled under the old name The Glen Els. It was 5 years old, matured in port casks and “gently wood-smoked”. It had a sweet and nutty nose, a chocolatey and mushy palate, and a long finish with heavy port notes.

We finished the tasting with two cask strength bottlings that resided beyond the 50 per cent ABV barrier. The Miltonduff 11 Years Old from Duncan Taylor filled the nostrils with malty, fruity and spicy fragrances (peaches, strawberries, oranges, nutmeg and wood). It coated the tongue in heavy flavors of toffee, chocolate, shortcrust and cotton candy. Upon its departure, it left behind the sweet, bold and good taste of cereals, raspberries, oranges and “franzbroetchen” with plum jelly (the latter being a cinnamon-flavored pastry specialty from Northern Germany). Our last dram came from Wolfburn, one of the most popular members of the “New Wave of Scotch Whisky Distilleries”. The Landskip was the only whisky in the line-up without an age statement. But what else than a number is age anyway? This powerful youngster filled the glass with the autumnly aromas of citrus zest, butter cake and yellow plums. It tasted of lemon cake with icing sugar as well as pineapples and pears. The long-lasting aftertaste was a little tart at first and got softer with time. It offered passion fruits, peaches and sweetmeats. So far, I enjoyed every Wolfburn bottling I ever had – and Landskip continued this tradition.

Besides Heiner, who was an excellent host with a rich whisky knowledge, there was another person to thank for this great evening, namely Claus Kollatsch. Usually, he shows tourists around Helgoland, introducing them to the island’s impressive landscape and moved history as well as the subterranean bunkers that once sheltered Helgoland’s inhabitants from the bombs of WWII. On that day, however, he helped Heiner to entertain his guests. Whenever our host put his face mask on to pour the next dram, Claus told us about Helgoland’s colorful bird life. Thus, we not only drank six delish drams that day, but we also got some interesting insights into the field of ornithology – a nice, little extra that everyone in attendance appreciated a lot!

In the glass (Glenallachie) 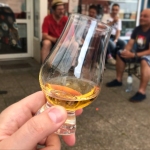 In the glass (Glen Keith) 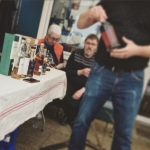 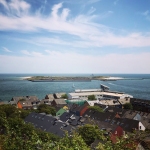