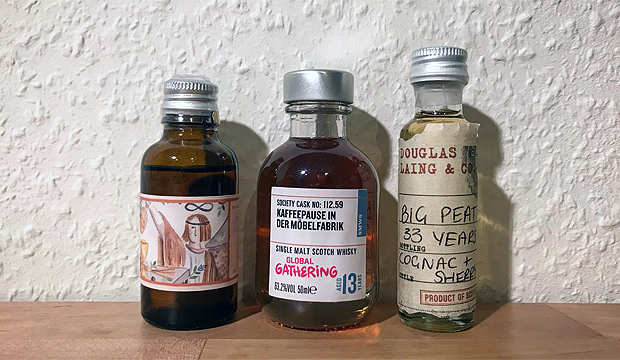 Recently, I had a lot on my plate. Besides my day job keeping me busy, I also did some freelance work on the side. And I got married, moved to a new flat and had some other stuff to deal with. For BarleyMania, this meant that I had to cut down on content creation a little. Especially the move will still keep me occupied for some time; but at least I have come to a point now where I can sit down again in the evening and let the day fade with a nice whisky. Of course, I will take the opportunity to write about some of these drams. For starters, I have picked three samples that I got from the fine people at Whic, The SMWS and Douglas Laing. There is not really a red threat to connect them, but hey … you don’t always need that. Sometimes, all you need is three fine whiskies in front of you, each of which gives you joy and fulfillment in its own way. That is exactly what I experienced when I degusted Whic’s Glenrothes 13yo called “The Magician”, The Scotch Malt Whisky Society’s Inchmurrin 13yo nicknamed “Kaffeepause in der Möbelfabrik” (check my review below to learn what that means in English) and Douglas Laing’s Big Peat 33yo with a double-finish in sherry and cognac casks. Here we go – whisky galore!

“I am the teacher, come to reach ya, take the old ways back to you …” – Thus starts the powerful hymn “The Magician” from Iron Maiden singer Bruce Dickinson’s towering solo album “The Accident of Birth”. It is playing in the background while I am having a get-together with another magician, namely this 13 years old Glenrothes single cask bottling by Whic. It is nicknamed The Magician and comes with a luxurious packaging. Also, it marks the first entry in the company’s new “Tarot” series. Drawn from a first fill sherry butt, the lucious Speysider opens with a creamy nose that is full of strawberries, cherries and peaches as well as butter cookies and hard candy. But where is the overproof ABV of nearly 62 per cent? Apparently, The Magician made any sting or bite associated with such a high strength disappear with a spell. In the mouth, the whisky’s vigor is more present: The liquid presents itself full-bodied, heavy and powerful. But also playful. It tastes of juicy grapes, red fruits, brandied pears, burnt almonds and dark chocolate sauce. Upon first sip, it even seems a little salty; but that sensation vanishes quickly. As expected from a man of word and wisdom, The Magician exits with elegance, grace and pride. His farewell stride lasts long, leaving behind pronounced notes of pear, apricot, wine gum and milk chocolate. “Shaman or priest, it’s all the same. The magician is my name,” proclaims Dickinson in the aforementioned song. It is a name I will hold in high esteem from now on, be it in relation to music or in relation to whisky.

The Swiss members of The Scotch Malt Whisky Society usually get their SMWS whiskies with a localized name on the label. We Germans, on the other hand, get our bottles with the original monikers in English. This 13 years old Inchmurrin – made at Loch Lomond Distillery – marks an exception. Since it is exclusively available on the German market, it has also gotten a German name: “Kaffeepause in der Möbelfabrik” which means “Coffee break in the furniture factory”. Sounds promising! And smells great, too. The sweet and herby bouquet bursts with wild honey, dried grass and mushy apple as well as lavender, resin and wood polish. Also thyme leaves on caramel pudding. And a whiff of full-bodied red wine. When the whisky hits the tongue, the referred-to coffee break begins. Here, I make out sweetened cappuchino and choc-covered mocha beans as well as roasted nuts, gooey treacle, runny beeswax and jellied lemon pieces. The mouthfeel is thick and weighty. The lasting finish starts with an assembly of different herbs and grasses. Then follow oranges, apples, chestnuts, cough drops and chocolate sprinkles. Plus honey and nutmeg. Between the two (or fifty) of us: I would not mind sipping The SMWS’s very aromatic number 112.59 in my coffee break every now and then. It is really delicious!

Hey there, old fella. Glad to meet you … again! Over the years, I have had dozens of amazing encounters with Douglas Laing’s classic Islay malt Big Peat. Still, this one is special. At 33 years old, this cognac and sherry-finished limited edition is by far the oldest Big Peat expression ever released. And it is a belter of a dram! The soft, laid-back nose is sweet and flowery with a very thin whiff of perfumed smoke. Due to the prominent violet note, I would suspect old Bowmore to be the leading malt in the recipe – even at this early stage in the degustation, where I have yet to taste and swallow my dram. Let’s go on and see … The mouthfeel is silken, full and waxy. Here, the violets are very well noticable, too. They mingle with burnt raisins, pureed apples, wet stones, soft kiwis and lit matchsticks. The sweet aftertaste has soapy, fruity and sugary qualities. The smoke – which has already been rather fleeting before – is barely noticeable anymore. No doubt about it: This is not your usual kind of Big Peat. It shows a side of the weather-beaten, smoke-laden, wild-bearded Ileach that I did not know before. I find this amazing. Cheers for still being able to surprise me, buddy! 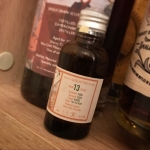 The sample (Glenrothes 13yo)

In the glass (Glenrothes 13yo)

Promo shot of Glenrothes 13yo (taken from Whic.de) 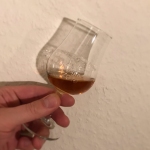 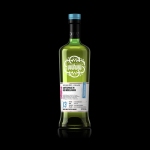 Promo shot of Big Peat 33yo (taken from DouglasLaing.com)

An ol’ geezer from Islay …