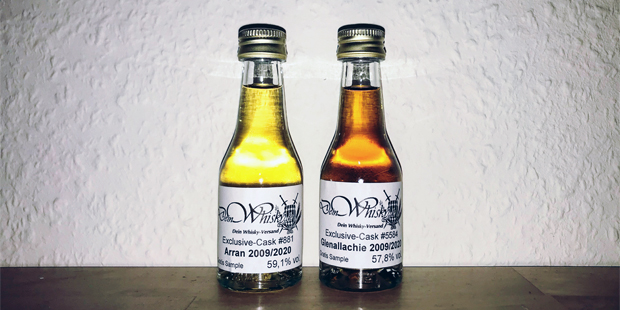 Recently, I was lucky to taste the latest two exclusives from German online shop DeinWhisky.de. Both are Scotch whiskies. Both are single casks. Both are ten years old. Both were distilled in 2009 and bottled in 2020. Both spent their full maturation time amidst sherry-treated wood. Both come with a similar ABV and price tag. Yet, both are entirely different from each other in the nose, mouth and throat. During the degustation, the Arran Vintage 2009 felt surprisingly heavy, sturdy and spicy to me. The GlenAllachie Vintage 2009, on the other hand, was immensely sweet, juicy and creamy. Personally, I enjoyed them both very much – so much that I would have a hard time picking a fave here. And fortunately, I don’t have to. So without ranking one above the other, here come my tasting notes to two top-notch single cask bottlings from a highly recommendable online shop. Nice work as usual, DeinWhisky.de!

A spicy beginning! The first sniff of this sherry-matured Arran 10 Years Old is full of thick, powdery spices and strong, earthy tubers. Only after a while, some sweeter notes appear, too: candy apples, butter cookies and marzipan bites. I find the aroma to be quite uncommon for an Arran – it is weightier, sturdier and spicier than I would have thought. The mouthfeel and taste go into a similar direction, making for a weighty spirit that is full, heavy and dry. My taste buds register dark berries, cooked apples, half-ripe kiwis, natural vanilla and liquid caramel. Plus – of course – intense spices. During the impressive finish, the dry and spicy notes step aside. They make way for bright flavors of pineapple, strawberry and white chocolate. This unexpected twist makes the ending of this great, complex islands malt especially memorable.

Oh, the darkness! After ten years in an oloroso sherry puncheon, the GlenAllachie in my glass has become as dark as the night – an impressive sight. The sweet n’ juicy nose is full of brambles, currants, hazelnuts, rhubarb, elderflower and cream. The soft palate has cotton candy and milk chocolate as well as raisins, strawberries, raspberries and mangoes. Plus hot waffles with vanilla sauce. The latter sensation is also very prominent in the long, galant finish. Other qualities in the aftertaste include dark chocolate, grated ginger, crunchy peach and meaty papaya. For this exclusive release, DeinWhisky.de has chosen one helluva cask! 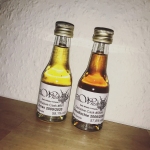 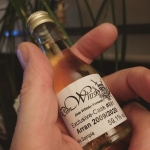 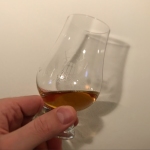 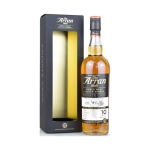 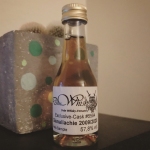 The sample (The GlenAllachie Vintage 2008) 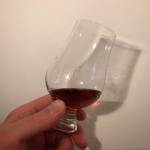 In the glass (The GlenAllachie Vintage 2008) 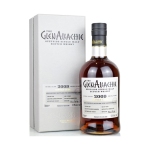 Promo shot of The GlenAllachie Vintage 2008 (taken from DeinWhisky.de) 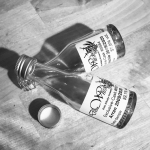