When speaking about Waterford Distillery on the Southeast shore of Ireland, one inevitably has to speak about terroir, too. The team around founder and visionary Mark Reynier (formerly of Bruichladdich) strongly believes in the impact of soil conditions, microclimate and other regional factors on the complexion and quality of their spirit. The idea that the very first link in the production chain, namely the crop, influences everything that follows afterwards is essential for Waterford: It is a leitmotif of their philosophy and their craft. Against this background, I must confess that I will most likely never be able to taste a dram and say: “Hey, the barley used here comes from Ballymorgan farm or Hook Head farm or Lakefield farm.” Still, I find Waterford’s terroir-driven approach highly fascinating. That is because I very much like the thought that every single ingredient plays a meaningful role in the creation of the final product. Speaking of which: The latest Waterford product to launch here in Germany is the Tinnashrule 1.1. Its story – the name tells us straight away – began at Tinnashrule farm, which is a one-hour drive away from the distillery. From the barley grown there, Waterford made a young whisky with a sophisticated cask formula, a vibrant flavor profile and a raised ABV of 50 per cent. It provides a skillfully arranged interplay of sweet, chewy, grainy and mildly fruity aromas. Occasionally, a touch of spice makes itself known, too. Personally, I find the Tinnashrule 1.1 to be a top-quality single malt Irish whisky with a beautiful story. Just think about it: Several years ago, a man called John Crowley put some seeds in the ground on his farm in Tinnashrule, Ireland. After the growth and harvest, the folks at Waterford Distillery milled, mashed and fermented the barley that emerged from these seeds. Then they distilled it into spirit, which they later put to rest in oak. And now a guy in Germany by the name of Tobi – yeah, that’s me! – drinks the whisky that resulted from this years-long process with a big, content smile on his face!

Eye: Apple juice.
Nose: The vinuous first sniff is buoyant and impactful. At first, my nostrils register grapes, limes, pomelos and a wee splash of white vinegar. Then, the aromas settle and the whisky becomes sweeter. I now get puff pastry, coconut flakes and icing sugar. Additionally, I smell a variety of dried fruits: apple rings, pineapple chunks and mango bites. Of course, Waterford’s “One place, one farm, one spirit” philosophy shows itself in the bouquet, too. It appears in the form of a shovelful of sweet, crisp barley.
Palate: Smooth. Thick. Heavy. Creamy! My taste buds register lots of vanilla sauce, apple puree, white chocolate and pancake. Some lemon-y notes add a slight sourness, while a piece of fresh-baked pistachio cake adds more heaviness. Furthermore, there is a zesty freshness and – again – a whole lotta crop n’ grain. This time, however, the barley feels ab bit more toasted.
Finish: The final notes last long … very long, to be precise! They are sweet and also a wee bit spicy. Moreover, the whisky develops some kind of a grassy quality towards the end. The last associations it places in my mind include flapjack, orange zest, caramel pudding, raisin bread, cocoa powder and cooled-off chamomile tea. 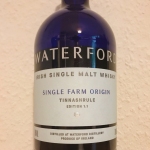