When they reach their 40s or 50s, people often look for new things to spice up their lives. Some buy a sportscar or a motorcyle. Others do a round-the-world trip. And yet again others – like Robert and Benny from the Netherlands – build their own micro distillery. Yeah, that’s right. Back in 2018, the two friends started their venturesome journey to become whisky makers. They took a distilling course in Belgium. They exchanged best practices with fellow craftspeople. They bought a copper still and other equipment. And last but certainly not least, they erected their production facilities inside the cow-house of Benny’s farm. They named the place Klein Amerika Distillery, after the patch of land where the minute farm distillery stands. And they called their spirit Zevendal Single Malt Whisky, after the wider region around their home turf.

Since they are pretty busy with their day jobs – Robert manages a hospital, whereas Benny runs a dairy farm and a camp ground – the founders of Klein Amerika Distillery only operate their still one day per week, usually on Saturdays. After a lot of trial and error, they perfected their recipe and filled their first cask in mid-2019. So the spirit inside still needs to wait a bit before we can call it whisky. Against this background, you might ask yourself: How did this tiny distillery, which has not yet released an official bottling, pop up on the BarleyMania radar? The answer is easy: social media! Recently, I stumbled upon Klein Amerika Distillery on Instagram by happenstance. Since I really enjoyed the content they posted there, I looked for additional information. Thus, I found out that this wee production site is located only a 100 kilometres away from my brother Martin’s hometown Düsseldorf. Since my wife Dini and I had planned to meet Martin and my other brother Flo in Düsseldorf this month anyway, I shot Robert and Benny an e-mail, asking if we could swing by and take a look around. They kindly agreed and just a week later, we crossed the border and became the second group of international visitors that Klein Amerika Distillery ever welcomed in its young existence. 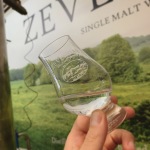 In the glass (Zevendal new make) 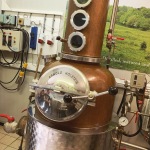 In the course of our one-hour stay, Robert got us up to speed about the history, philosophy and approach of Klein Amerika Distillery. Benny said “hi”, too, but had to leave early to meet another appointment. We learned, among others, where Klein Amerika Distilley sources its local ingredients, how it produces its spirit and from whom it buys its casks. In regard to wood management, Robert shared a detail that I found especially interesting: “We mostly use traditional ex-bourbon casks,” he said. “On the one hand, they are cheap and easy to obtain. On the other hand, they contained high percentage alcohol before. So the chances for off-note-causing bacteria to survive inside are comparatively low. Therefore, it is safer for us to lay our new make to rest in such vessels than in ex-wine casks, for example. Considering how little spirit we produce, it would be a tragedy if an entire cask developed in a strange and unwished-for way.” Nevertheless, Robert and Benny have also filled a few ex-sherry casks and they might experiment with wine finishes in the future, too. At this point, however, it is still too early to say what effect any of these wood treatments will have. For the next couple of months, the motto remains: Let’s wait and see …

Although we could not try any fully matured whisky for obvious reasons, we were not left high and dry during our visit. Whatever there was to taste, we got to taste. We took a sip of the barley beer and we savored a glass of each new make that Klein Amerika Distillery produces: the unpeated one and the peated one (35 ppm). I was really impressed by both! They had intense aromas, a strong stature and a creamy mouthfeel. Despite the very high ABV of 67 per cent, they felt well rounded and smooth. In both new makes, I made out breakfast cereals, shortcrust pastry and cocoa powder. The unpeated spirit had a fizzy fruitiness (lemon, rhubarb), while the peated spirit was rich with nuts and toffee. The smoke felt rather light in the nostrils and in the mouth. Based on these early impressions, my verdict is clear: Klein Amerika Distillery is a super-sympathetic craft unit that produces some really tasty spirit. I am helluva curious to discover what their first fully matured whisky will taste like. For this, however, I still need to wait another year (or longer). Till then, I will follow Robert and Benny’s whisky journey on social media and on their blog. I strongly recommend you to do the same … After all, I am sure that these talented whisky makers from the small town of Groesbeek in the Netherlands will give us much (liquid) joy in the years to come! 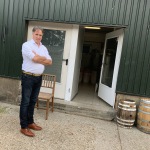 In the glass (Barley beer)

*** I was kindly invited to a private tour by Robert and Benny of Klein Amerika Distillery. ***