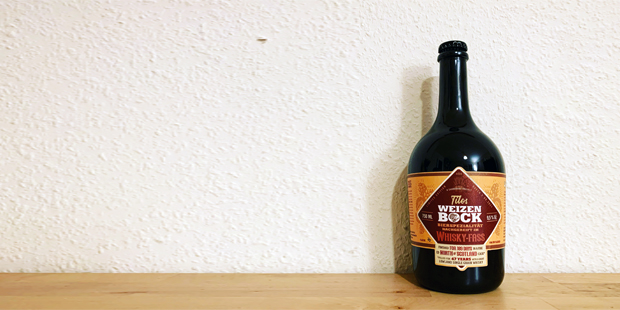 Batch two of Tilos Weizenbock ain’t just another barrel-aged craft beer. To create it, Tilo “The Caskhound” Schnabel took a strong wheat bock beer from traditional South-German brewery Schönbuch Braumanufaktur and gave it an incredible extra-treatment: He put it into a whisky cask for more than half a year; but not just any whisky cask! The vessel, in which this creamy and full-bodied beverage ripened to perfection, comes from defunct grain distillery North of Scotland. Before Tilo re-filled it with beer, the cask contained “a great Lowland single grain whisky” for no less than 47 years! And this shows … Tilo’s Weizenbock is immensely complex and multi-layered! In it, fingerlicking good sensations of sweet treats and bold fruits mingle with cereals, pastry, and chocolate. The memorable finale, in which this wonderful flavor mix culminates, is strongly shaped by the barrel in which the beer lay. When I ordered Tilos Weizenbock from Siebert’s Whiskywelt in Munich, I asked for two bottles because I did not see that they were 0.75 litres each. My first thought was: Hmmm, do I really need two big bottles? After I had emptied the first of them, my attitude took a 180-degree turn. Now I see it like this: Damn, I am really thankful that I still have the chance to revisit this masterpiece once more at a later time.by Tobi

Eye: Amber with a snow-white top.
Nose: A rich assortment of wheat-y and yeast-y notes, followed by softened orange zest, chunky apple puree, fluffy puff pastry, and runny caramel sauce. The nose is sweet and creamy, but also crisp.
Palate: Now that’s what I call complexity! There’s really a lot happening in this good, strong, and very special brew: Vanilla fudge and milk chocolate here. Banana chips and peach chunks there. Brown sugar and oatmeal cookies elsewhere. The grain whisky, which preoccupied the cask for a stunning 47 years, starts to show itself at this stage, too.
Finish: The finish is a full-on grain whisky blast! When the liquid runs down my throat, it almost feels as if it was half brew, half Scotch! The final choir of vanilla, raisin, toffee, choc, and cereals leaves behind a loud and long echo.

*** I bought the bottle myself as a regular customer. ***