One thing I really love about whisky is this: It’s one helluva complex and versatile drink; and no matter what a dram’s characteristics are – old or young, strong or mild, peaty or fruity, and so on – it always has the potential to blow you right out of your socks! My last two reviews here on BarleyMania illustrate this issue very well: Last week, I savored a 50-year-old grain whisky from defunct Scotch production site North of Scotland. And now, I am degusting a 3-year-old single malt from (rather) young Welsh distillery Penderyn. The first slept patiently a refill ex-Bourbon barrel for over half a century, the latter was awakened from its short slumber in a Madeira cask briefly after it earned itself the right to be called a whisky. In regard to make, character, and taste these two drops are as different from each other as it gets. And yet I could not pick a fave: They are both equally amazing in my book! What I found especially impressive about this Welsh youngster is the fact that it wonderfully illustrates how extremely well the whisky makers at Penderyn master their craft. While the Madeira cask has certainly influenced the liquid a lot, the top-quality new make spirit also shines through in all its glory. If I had to break it down to a simple formula, I would go with the following: This young single cask bottling is 50 per cent distilling excellence, 50 per cent wood management masterwork, and 100 per cent Welsh whisky awesomeness!

Eye: Foxy – both in regard to the color and in regard to the swiftness of the legs.
Nose: Light, fruity, spritzy … and alive! At first, a rush of red berries floods the nostrils. Then follow crunchy pears, sugared cheeries, and candied apples. And – equally well pronounced – fresh lemon curd, sweet mirabelle jam, and creamy vanilla sauce. I really love how spirited and animated this Madeira cask-matured youngster is; and how delish a bouquet it provides!
Palate: Oh, what a lovely fruitiness! There’s raspberries, apples, pears, peaches, and green bananas. These notes are accompanied by caramel creme, cocoa nibs, and orange-flavored refreshment sticks. Whereas the liquid is mostly brisk n’ crisp, it also has some kind of a dry-ish side (brought forth by the Madeira-soaked wood, I suppose). As expected, the high ABV of 61.3 per cent and the young age of only three years are clearly apparent on the tongue. However, they make themselves known in a very pleasing and satisfying way; which is a direct result of the whisky’s excellent make: At any second, you can taste just how clean, leveled, and well-made a distillate the Penderyn folks filled into the cask!
Finish: Wow, the finish lasts and lasts … damn … is it over yet? Nope, we are not even close. As this young Welsh single malt whisky orchestrates its on-and-on-going farewell, it further emphasizes on the bright, lively fruit notes mentioned before. But at the same time, the spirit also becomes increasingly chocolate-y: Think brandied pears and stewed apples drowned in an abundance of aromatic, dark choc sauce (with a bit of grated ginger spread on top)! 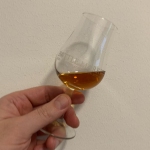