This whisky here – Broomlands 1.2 – is a brandnew addition to the acclaimed “Single Farm Origin” series by Ireland-based Waterford Distillery. As the name suggests, the barley from which the spirit is made was exclusively grown at one location: Broomlands Farm in the south eastern corner of Ireland. Located in close proximity to both the Atlantic Ocean and the Irish Sea, the soil that nurtured the crop is very clay-rich and moisture-retentive; and thus highly fertile and productive. These and many other pieces of information I got from Waterford’s official homepage, where all of the company’s barley growers, including Broomlands Farm, are introduced with a short profile including text, imagery, and even video. So if you are curious to find out more about the place where this stunning dram’s journey began, hop over there and take a look around. And if you would like to learn how I enjoyed it, read on and check out my tasting notes for the recently released Waterford Broomlands 1.2 below!

Eye: Sun-shone crops.
Nose: Dense, full, and copious with grain, cream, and fruit – the latter mostly yellow and dried. In detail, I get apricot, apple, plum, and lemon here. These notes are further brightened up by a splash of pineapple juice. And then, there is also a spoonful of breakfast cereals drenched in milk.
Palate: On the palate, too, there’s lots of reaped crops and sliced-n-dried fruits: apple rings, banana chips, peach chunks, melon bites. Plus crumbled toffee, cracked walnut, thick vanilla milk, and – somewhat unusual – mildly salted lye pastry.
Finish: The medium finish leans into a dry-ish direction. It offers yellow fruits, baked goods, aromatic zests, and differing kernel. Now, a reluctant sweetness unfolds as well. And shortly before the whisky fades for good, a peppery bite becomes part of the farewell mix, too. 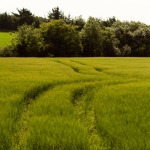 The farm (taken from WaterfordWhisky.com)