Towards the end of the last year, long-serving indie bottler Berry Bros & Rudd released the second outturn of whiskies within its praised “The Nordic Casks” series. This time, Reserve Whisky Manager Jonny McMillan and his team worked with four reputable distilleries from three different countries: Thy and Stauning from Denmark, Smögen from Sweden, and Teerenpeli from Finland. On top, they also produced a real novelty, namely the first-ever blended malt whisky composed exclusively from spirit distilled in the Nordics. Its name Vindöga derives from an ancient Swedish word for “window”, and its recipe includes whisky made at Fary Lochan (DK), Mosgaard (DK), Smögen (SE), High Coast (SE), Myken (NO), and Teerenpeli (FI). Thanks to Berry Bros & Rudd’s German distributor Kirsch Import, I got the chance to try all five releases of “The Nordic Casks #2” calmly and attentively at home – read on to learn how I enjoyed them!

It’s hard to believe that this organically produced single malt whisky from the farm distillery Thy in the very north of Denmark has only just reached maturity! There is a ton going on this 3-year-old dram, and the degree of complexity is staggeringly high! The nose is heavy and copious with golden crop, buttered toast, dried apricot, and yellow plum. Additionally, I smell a good amount of sun-bleached hay and aromatized tobacco in it, too. The first sip shows some vigor; the cask strength ABV produces a peppery tingle – but don’t let this sensation mislead you: the alcohol is very well integrated throughout all stages of the degustation! Taste-wise, I get a shovelload of cereals and kernel first, followed by apple puree, banana squash, caramel pudding, and oatmeal cookie. Now and again, a canned peach-kinda sweetness cuts through. And I also sense a thin veil of perfumed puff amidst the other notes. The finish is mid-long. It leans into a milky and creamy direction, but also offers sweetness, fruitiness, and (light) smokiness. This well-orchestrated finale draws a memorable, oh-so-tasty line under a very impressive offering from a go-getting production site we’d better keep in view!

In recent years, Smögen from Sweden managed to make a truly excellent name for itself – also far beyond the borders of its home country! For “The Nordic Casks #2”, the BBR team chose from them a 10-year-old single malt whisky ripened in an Oloroso sherry hogshead. The dram smells of wild strawberry, rosehip tea, and hemp rope as well as oak, herb, and zest. The accompanying smoke reminds me of a grain field on fire! The taste is pretty unique, offering a sticky mix of thick quince compote, herb-infused honey, and half-sweet amond paste spread across a thick slice of well-baked grey bread. From afar, the ashes of a beach bonfire fly over and set down on the other flavors like a fumy blanket. Despite its fire and flame, the spirit feels runny and oily in the mouth; when gulped down, it becomes a little colder, fresher, and ashier. The smoke rears up one last time. Then it fades – with a syrupy sweetness, a caramel chewiness, and an apple peel waxiness following in its wake.

This is a first for me: my debut dram of Teerenpeli from Finland! The unpeated single malt whisky is 9 years of age and matured entirely in an Oloroso sherry hogshead (just like its sister release by Smögen). When I first sniffed it, I made out lots of sweet and fruity notes like strawberry-flavored toffee, choc-sprinkled raspberry pudding, and crunchy candy apple. Once it has drawn a bit of air, however, the sherry becomes stronger and sturdier, giving the dram an intense spiciness and a mouth-watering nuttiness. The palate is all about nougat, fudge, and creme at first. Then the flavors broaden, welcoming wood, wax, and berry among their rows, too. Further down, I also taste an “older” note that reminds me a little of dusty cushion or linen cloth. The climax is sherry-driven again; it focuses on cocoa-rich chocolate, crumbly fudge, and dried fruits of all kinds – with a finger twist of pink pepper and a wee bit of saw dust scattered across. Somewhat surprisingly, the last sensations to stimulate my tastebuds are not yellow or red fruits, but green ones: lime, kiwi, and grape! I did not see this coming, but I must say that I tremendously enjoyed the unexpected twist at the end. No doubt: I will try more Teerenpeli releases in the future!

With an annual output of more than 1,000,000 litres, Stauning is not only Denmark’s biggest producer of whisky in particular, but also of spirits in general. Besides malt whisky, they also make rye whisky. To “The Nordic Casks #2”, the distillery contributed a dram from the latter category, namely a 5-year-old single cask rye with a Moscatel finish. The vessel instilled a wealth of delicate fruit notes in the grain-forward spirit: Redcurrants, cherries, and limes enter the nostrils. Blueberries, plums, and brambles unfold on the tongue. Grapefruits, oranges, and blackberries slide down the throat. Typical of a rye, the differing sensations are accompanied by distinct ginger n’ pepper stings. Also, I make out shaved wood, grey bread, and edible paper. And – especially on the palate and in the finish – a delicate flood of chocolate milk!

As written in the introduction to this tasting flight, Vindöga by Berry Bros & Rudd is the very first blend made entirely from Nordic malts. According to the promotional flyer, “this dram finds weight from the heavy-hitting Fary Lochan (Denmark) and the robust Teerenpeli (Finland), with a large helping of peaty complexity from Sweden’s Smögen and High Coast. Finesse comes from the organic Mosgaard (Denmark) and the Arctic distillery Myken (Norway).” Translated into my subjective perception, this would read as follows: Vindöga starts off with a multilayered interplay of darkened smells like chimney wood, candle wick, toffee crumble, fruit compote, and winter spice. It then proceeds to fill the oral cavity with a dense cloud of black, tarry smoke. The marmalade sweetness, which is also part of the mix, has a hard time digging itself through the heavy fumes at first. But after a while, it succeeds in claiming its ground and forming an equal counterpart to the tar, coal, and puff. To round things off, differing citrus fruits give the whisky a certain vividness, whereas raisins and dates amplify on the spirit’s natural delicacy. The big finish brims with brittle, cake, and wood as well as elderberry, cocoa bean, and sweet licorice – all encapsulated in a scented candle’s billowing smoke. 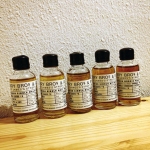 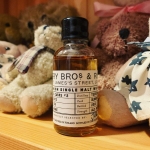 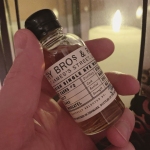 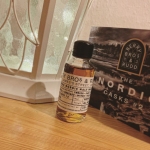 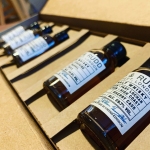