As a welcome drink, we were served a Darnley’s Gin with ginger ale and orange slice – a perfect summer’s treat that still tasted great on a not-so-warm evening in October. A short while and a few of canapés later, the actual tasting began.

We started with a delightful dram of Spice King, one of Wemyss Malt’s three signature blends alongside The Hive and Peat Chimney, followed by four truly outstanding single cask bottlings. The Tropical Fruit Banquet, a 20-years-old Glen Elgin that bears its name with good reason, was succeeded by the Fennel Finale, a 19-years-old Glenrothes matured in a sherry cask. When you closed your eyes while drinking this golden liquid, its wonderful herbal note made you feel as if you were standing in the middle of a physic garden. Next up, was the Pomme Piquante, a 19-years-old Highland whisky by Clynelish. In regard to its character, I would locate it between the preceding two. And then came the Hickory Molasses Glaze, a 15-years-old Bunnahabhain with a slight but very delicious chocolate note. I am not entirely sure if the nuances of peat I sensed in there were really in the whisky or just in my imagination – elicited by this fine dram’s Islay origin. The last “real” whisky we had was another blend, namely the award-winning Kiln Embers. With round about 25ppm, this was by far the peatiest pour we had. And oh, was it good! Rich, deep and perfectly balanced. If you still want to score a bottle for the more than fair price of <40 Euro, you have to hurry. The Kiln Embers launched about nine months ago and the bulk of its limited contingent of 15,000 bottles is already gone.

You might have stumbled upon my usage of the phrase “real” before. Well, I used it on purpose, because the main part of the tasting was followed by a wonderful encore. Before the event ended, we got to try the new make and an 18-months-old cask sample from the first-ever whisky to be released at Kingsbarns Distillery, which Wemyss Malts founded in late 2014. Its first whisky will presumably hit the market in 2018 and judging by the new make and cask sample, it will be a light, floral and fruity Lowland malt you better keep your eyes open for.

During the event, Mr. William Wemyss of Wemyss Malts and his partner-in-crime Didi Schulz of Alba Import proved to be perfect hosts, introducing each drink with enthusiasm and sharing a wealth of knowledge. Among others, we learned that well-chosen wood trumps mere age in the maturation process, that the flavor profile is the key asset in the creation of a premium blend and that buying high-quality single cask whiskies can often be quite a gamble for an independent bottler. Throughout the whole evening, I soaked in the words uttered with as much excitement as I tasted the whiskies (and other drinks) served. While I will most likely not have another chance at trying the other three of the strictly limited single cask releases again, I am looking forward to opening the bottle of Tropical Fruit Banquet I brought home. Besides being a real treat for my tastebuds, it will also remind me of three wonderful hours spent with friends and fellow whisky lovers. 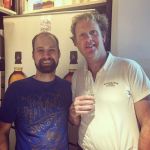