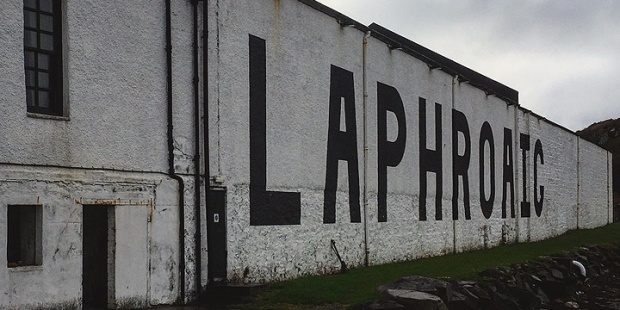 I still remember my first Laphroaig 10 – the dram that sparked my love for peated whisky. Back then, my palate was not used to such an uncommon taste and it felt as if someone had tapped the ash from their cigarette directly onto my tongue. While I have never smoked more than an occasional cigarette at a party or concert, I instantly loved that sensation. By now, my senses have better adjusted to peated whisky and drinking a Laphroaig no longer feels like a smoke bomb exploding in my mouth. Of course, the peat smoke is still there for me. But now I also discover many other nuances that I could not make out when I first encountered “the most richly flavoured of all Scotch whiskies”. One thing, however, has not changed over time and that is the way this one-of-a-kind distillery continues to fascinate me. So when I planned my recent trip to Islay, the first distillery tour I booked was Laphroaig’s extensive “Distillers Wares” experience.

Since my girlfriend and I stayed in the cozy Lochindaal Hotel in Port Charlotte, Laphroaig (which is located near Port Ellen on the South shore of Islay) was not exactly around the corner for us. In fact, the distillery resides 20 miles away from where we were housed. So we took the bus at 8.17 and barely an hour later, the driver dropped us off right in front of the distillery. If you have not been to Islay yet, you might find this information quite useful: As long as your destination is on the official route, you do not need to worry much about using the installed bus stops. When you see a bus approaching, just wave your hand and the driver will stop to let you in. And when you want to get out somewhere special, just tell the driver when you enter the bus. Laphroaig, for example, is 1.3 miles from the installed bus stop in Port Ellen and 1.9 miles from the one at Ardbeg. Yet, we did not have to walk any of these distances, but were carried straight to the distillery’s doorstep.

The short wait in the visitor center was over in next to no time. To keep you entertained, Laphroaig does not only have a ton of cool merchandise on display, but they have also set up a small museum that tells you of the distillery’s exciting history. Plus, they have free wi-fi and means to charge your phone (if you bring a cable). Since you are allowed to take photos during all stages of the tour, you might want to make use of the latter option to ensure your battery won’t die halfway through the experience.

The tour itself, led by our attentive, witty and well-informed guide Sherylyn, was a total blast! When we visited the malting floors, we got to taste both the fresh barley and the peat-smoked malt. In front of the kiln, we got to handle the traditional tools used for cutting the peat. In the mash house, we got a sip of “barley beer” (i.e. wash) straight from the wash back. And along the way, we learned all kinds of interesting details, such as the fact that Laphroaig’s peat storage does not have any doors because the distillery wants all the elements of Islay to directly find their way into the whisky.

Subsquent to our one-hour walkabout through the premises of Laphroaig, we gathered in the distillery’s oldest on-site warehouse and tasted three “distillery only” single cask releases: A smooth 10yo from a first fill bourbon cask with 52.9 per cent ABV, a salty 11yo from another first fill bourbon cask with 58.9 per cent ABV and a fruity 19yo from a 2nd fill sherry cask with 55.1 per cent ABV. After we had savoured and discussed these great whiskies, we were given a valinch to fill our own 250ml bottles straight from the casks. While most of the participants went for the 19yo or the 11yo, I was happy to go with the 10yo. Sometimes, you have to root for the underdog.

Though the official experience was over after we had filled our bottles and formally signed the warehouse’s log, my girlfriend and I did not leave right away. As Friends of Laphroaig, we went on to collect our annual rent (a Laphroaig 10 miniature) and locate our own square feet of land on the distillery ground. The latter turned out to be quite an adventure, with us having no clue how to operate a GPS and sinking into the mud till our ankles were no longer seen. Thankfully, we borrowed wellies from the distillery before we set off! Back in the visitor center, we then ordered one last dram (Nadine had the Quarter Cask and I had the 10yo Cask Strength) as the perfect ending to an unforgettable distillery visit.

A shot of “barley beer” 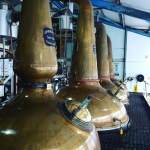 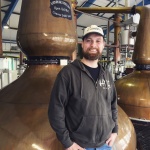 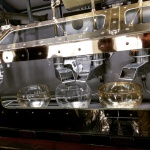 Filling my bottle with a valinch 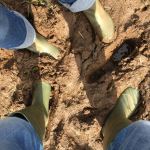 Searching our square feet of land