“The wine cask is for us what the ex-bourbon cask is for others”, said Langatun’s co-owner and Head of Sales Christoph Nyfeler early on in his Swiss whisky tasting at the premises of Hansemalt in Hamburg – a statement that surely made the two handful of whisky enthusiasts attending the event sit up. In the case of this small distillery from Switzerland, there is more to it though. As the founders of Langatun knew right away that they wanted to bottle their first spirit at an age of 5 to 7 years, they reasoned that wood soaked in wine would have a stronger impact on the liquid in such a comparatively short time than staves drenched in bourbon. So they decided to make Chardonnay, Pinot Noir and Châteauneuf-du-Pape the three standard barrel types for their small batch whiskies. As the people at Langatun – which is the Celtic name for the town of Langenthal – believe that the selection, preparation and upkeep of the casks is of tremendous importance for the quality of their products, they follow up on this point with utmost attention. They mostly buy from small vineyards with whom they have a personal relation, they only work with the best of Switzerland’s few remaining cooperages and, with just a very few exceptions, they exclusively use 1st-fill casks.

The fact that we can enjoy whisky from Switzerland these days is not a matter of course, by the way. For the greater part of the last century, making alcohol from crops was strictly forbidden within the state territory of our Southern neighbours. This goes back to a law established during World War I, when food supplies were rare and grain was needed for bread rather than booze. Of course, the situation improved over time, but for decades no one in Switzerland bothered to abolish the old statute. A nation of fruit brandy makers, the Swiss simply saw no need in tackling this issue. And thus the law that forbade the production of grain-based schnapps on Swiss ground remained unimpaired till 1999. Since then, no less than 53 individual whisky makers have emerged in the country. While most of them only fill the occasional cask of whisky on the side, Langatun is one of four distilleries in Switzerland that call the production of single malt their core business.

The first drink we had was not a whisky though, but a liquor called Gold Bee. According to Christoph, this sweet sip is not only very popular among Swiss barkeepers, but it is also his own preferred drink at whisky fairs. If you a have to talk for 10 hours, the honey really does your throat a lot of good and if you have to dram for 10 hours, an ABV of 28 per cent is quite a bit easier to take than an ABV of 60 per cent. Next up was Winter Wedding, a smooth and easily drinkable marriage of Langatun’s two best-selling whiskies, namely the smoky Old Bear and the spicy Old Deer. We had the combination of both before the individuals, because Christoph did not pack the regular versions of the Bear and the Deer but the cask strength editions. Six to seven years old and bottled at 58.5 per cent, they were both sturdy, robust and graced with long finishes. I particularly enjoyed the delicate spiciness of the reinforced Old Deer, but the strengthened Old Bear’s wood-smoked flavours were also very nice.

Whisky number five was Jacob’s Dram. Called the”European Whisky Of The Year 2016″ by Jim Murray, this was the drop that situated Langatun on the international whisky map. As soon as the accolade had been received, calls and letters came in from all over the world! Our last three sips came from the distillery’s Cask Finish series, which will go on sale in Europe in a few weeks. The basis for all of these whiskies is the same: They were matured in Chardonnay casks for about 6 years before they received a finish in carefully selected Sauternes, Oloroso and Zambujeiro casks. The length of the finish varied from case to case. While the Sauternes Cask Finish was refined for a total of 15 months, the Sherry Cask Finish only needed 3 months to come to perfection. And I really mean perfection here! The color, the scent and the flavour of this incredible dram were so intense that I would easily have guessed that it spent its entire maturation time in a 1st-fill sherry cask! Even though the price of this beauty will be a little out of my normal budget range, I am considering to get a bottle anyway. It was just so very awesome!

Throughout the full duration of the 2.5-hour event, Chris and Stephan of Hansemalt were fantastic hosts. They poured our drams, refilled our water, provided us with snacks and engaged in conversations. Christoph was also a great guy, sharing a wealth of information on Langatun’s short but exciting history (the distillery sold its first whisky in 2011) and giving everybody as many refills as they wanted afterwards. I am very thankful to Chris and Hansemalt for the invitation and will definitely keep a eye on the development of Langatun from now on. For starters, I have already ordered a bottle of Winter Wedding to be one of my Christmas drams for this year’s festive season. 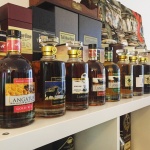 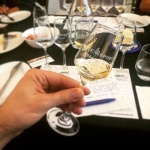 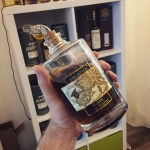