Following up on last week’s blog post centering on a 55 years old grain whisky by North British, a 25 years old Lowlands jewel by Littlemill and a 40 years old Speyside masterpiece by Macallan, I am happy to review the remaining three expressions of the latest batch of XOP bottlings from Douglas Laing today. To make sure all of Scotland’s whisky regions are represented accordingly in this exquisite selection of well-aged drams, the Glasgow-based independent bottler has also picked a 26-year-old Highlander by Glen Garioch, a 30-year-old Islay malt by Laphroaig and a 21-year-old Campbeltown pour by Springbank to be part of the most recent line of Xtra Old Particulars. Okay, one might argue that the islands are missing, but as they are often filed as a sub-category of the Highlands, I think it is fine to say that the six bottlings we have been presented with cover every which corner of the Caledonian whisky map. So without further ado, let us jump into the fray and see what the aforementioned Glen Garioch, Laphroaig and Springbank are like.

There are not many distilleries in Scotland, whose names get misarticulated more often than that of Glen Garioch. Cause apparently, the correct way to call this long-lasting production unit in the Highlands is “Glen Geerie”. Who would have thought? But enough of the phonetics. Let us rather talk whisky! At an ABV of 56.9 per cent, this brawny bottling is the strongest of the six new XOP releases. And its vim and vigor shine through in the nose as well as on the palate. Thanks to the long maturation time and the superb quality of the liquid, the alcohol is never too dominant though. Instead, it forms a beautiful union with the other aromas and flavours. In the nose, we get a lot of crème brûlée, caramel sauce and butter cookies, but also soft fruits such as apricots, bananas and peaches. And maybe a bit of blooming clover, too. Our taste buds are then up to a similar sensation as they are greeted by baked goods and creamy pudding as well as yellow fruits and maple syrup. Once gulped down, Douglas Laing’s new Glen Garioch 26yo warms the entire mouth and stays for a long time. I really hope that Christopher Lambert’s motto “In the End, there can be only one” does not apply to this particular Highlander. Cause only one dram of it would never be enough!

Laphroaig is one of my very fave distilleries in the world! I enjoy their core expressions regularly and also sip rarer bottlings of theirs occasionally. Still, it does not happen all too often that I get the chance to savour a single cask Laphroaig that patiently waited for three full decades before it exited the barrel and entered the bottle. Thanks a million for such a great opportunity, Douglas Laing! This 30-year-old peat monster delights the eye with its light golden color and hits the nose with peat galore! Behind a thick curtain of medical smoke, wet moss and weather-beaten wood, we also get to sniff the fine scents of lemon fruits, mint leafs and wild herbs. In the mouth, the malt presents itself islay-born and island-shaped. With earthy peat, salt-laden air, tangy waves and sizzling bonfire twigs all of the isle’s elements are there, powerful and pristine but also well-integrated and harmonic. The finish then comes along as a storm of smoke rather than a puff of peat. And it washes over you like a giant, oh-so-delicious wave!

Single cask releases by Springbank are hard to get these days – at least if you are looking for offerings from other companies than Cadenhead’s. As part of Springbank Distillers Ltd, the latter surely have less trouble than their competitors when it comes to obtaining whisky from the legendary Campbeltown distillery. Still, every now and then another indy bottler also manages to score a cask. In this case, Douglas Laing were able to fill the contents of a re-fill hogshead (#11756) into 308 individually numbered bottles. Typically for the Campbeltown region, the straw-colored spirit is heavy, thick and vigorous. Aroma-wise, it is sweet with half-ripe pear, grated nutmeg and cigarette ash. Taste-wise, it brims with green fruits, licorice and smoke. The finish of this strong and sturdy Springbank is shaped by cocoa beans, pepper and more licorice… and it lasts forever!

In the glass (Glen Garioch) 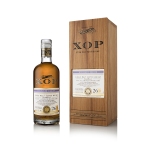