Last month, I got an invitation by Peter of Friends Of Single Malt to participate in a special kind of blind tasting. He had been given three 700ml bottles from an indie bottler, whose name we only learned with hindsight (Whiskymax). The idea was to share the content of these bottles with other whisky bloggers and have them write their reviews without any given information. As this sounded like a fun way to spend an evening or two, I gladly joined in. A few days later, I received a parcel with three anonymous 5cl samples for which I was asked to pen tasting notes and – if I felt like doing so – take an educated guess at the distillery, the region, the age and the ABV. In the following, I’d like to show you how I approached the challenge of unmasking these mystery malts. And, of course, I will also tell you how close I got to classifying them right.

As I knew that my sensory apparatus could point me towards “A” on one day and towards “B” on another, I decided right from the start to savor the samples in two sittings rather than one. Thus, I ended up having a full 2.5cl dram of each whisky on two different occasions. To have some kind of an anchor point, I also poured myself two reference whiskies. One was the regular Timorous Beastie without an age statement and the other was the 21-year-old Sherry Edition of Douglas Laing’s “mighty mouse”. Sipping this related-yet-diverse duo of malts in between helped a lot to gain perspective and create a context for the other three “phantom pours”. To be able to relate them to each other, I did also not finish the samples subsequent to one another. Instead, I went back and forth within the three-piece line-up. But what whiskies did I ultimately degust? The answer is no more than a few words away…

All in all, this certainly was a fun experience. And I must say that I savored the whisky quite a bit differently under the given conditions. Often when I write my tasting notes, the distillery, the name or the packaging already point me into one direction or another. So approaching the spirit completely free of any outer influences and “let the whisky do the talking” was not only challenging and demanding, but also eye-opening and refreshing. So many thanks to Peter for getting me on-board! To read my full notes on the three Spirit & Cask Range expressions, as well as those of the other partaking bloggers, feel free to check out the original post on the Friends Of Single Malt blog. It is a very interesting and entertaining read, for sure!

Me w/ the samples 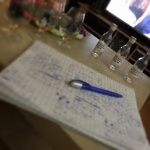