Though the topics were always great, I did not make it to most of the tastings that took place at the Christiansen’s bar in Hamburg this year. Therefore, I am all the more happy that I got to attend the venue’s traditional pre-Christmas event with Gerd Schmerschneider of Kiel-based spirits distributor Prineus. This year, he brought along seven bottles from three different partners of his, namely Waldviertler Whisky from Austria, Compass Box from England and Single Malts of Scotland from… who would have guessed… Scotland.

We kicked the evening off with the two expressions from Waldviertler, both of which were so-called dark rye malts. This means that the distillate is made from rye, which is roasted and malted like barley. According to Gerd, Austria’s pioneering whisky distillery is the only production unit in the world that applies this procedure. While the regular Dark Rye Malt was kept in oak casks for six years, its limited edition counterpart was classically matured for nine years before it got finished in an ex-Laphroaig cask for 12 months. Both whiskies had black bread, apple compote and cocoa beans as their most striking notes. The one that got refined in an Islay cask was more complex. Additionally, it also brought salted prezels, medical smoke and clammy cellar walls to the table. The two Dark Rye Malt bottlings by Waldviertler were pretty interesting. But they also marked a fairly acquired taste.

From Compass Box we savored the three special editions of 2018, two of which were named after famous bars in Chicago (Delilah’s) and Paris (Juveniles). The third was the current expression of the fan favorite smokster Burning Heart. As a big fan of CB mastermind John Glaser’s creations, these were the three drams I was looking forward to the most. And my high expectations were fully met! Unlike the first Delilah’s bottling from 2013, the second edition with the suffix XXV from 2018 does also feature a proportion of sherry-matured whisky. This clearly tells. Besides citrus and orange zest, the nose also has spiced cake and raspberry sorbet. The sherry is strong, but not overpowering. The palate is massive and fruity with berries, pastry, spices and curd. The long finish leans into a sweeter direction, adding a spoonful of honey to the mix. A real cracker of a dram!

Whereas the Delilah’s XXV laid full and heavy on the tongue, the Juveniles felt light and fresh. Composed from malts by Strathmill, Balmenach, Clynelish and Glendullan, it offered lots of white wine, pear, gooseberry, kiwi, cream and candied fruits. I absolutely loved it! The same was also valid for the Flaming Heart, which Gerd called “a whisky like a rock song” with a label design that would make a great motive for a tattoo. By tradition, Caol Ila is the leading malt in every new expression of this series. Consequently, there is a lot of ashy smoke to be found in the Flaming Heart, which contrasts nicely against the fruity notes from the Clynelish in the recipe. Sipping this hard rockin’ Scotch ain’t like jamming with your pals in the garage. It’s more like hitting the stage of a jam-packed arena as the guitarist of Iron Maiden!

The last company, whose product we tried, was Single Malts of Scotland, an indie bottler associated with Elixir Distillers. I must confess that I had not followed their doings closely in the past. But that will change from now on, thanks to the excellent quality of the 22-year-old Mortlach and equally well-matured Bowmore that Gerd had brought along! The first-mentioned Speyside malt was a sublime sherry bomb with lots of grapes, brittle, oak, plum and wine gum in the nose as well as on the palate. And the last-mentioned Islay whisky was a complex old-school dram with an elegant complexion, an even balancing, a maritime character, a slight smokiness and a rewarding finish. This aged expression from the oldest distillery on the Queen of the Hebrides certainly ended Gerd’s x-mas tasting with a bang! 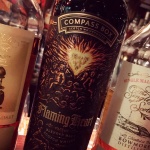 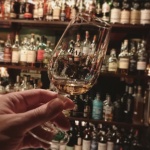 In the glass (Delilah’s)