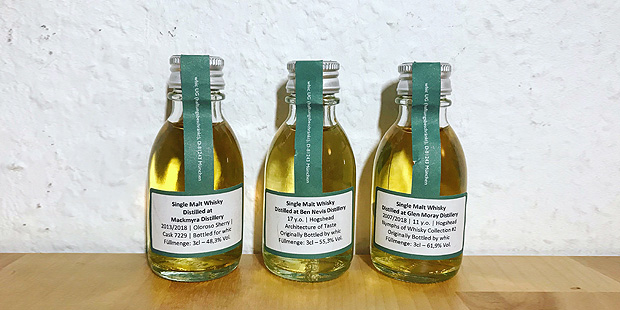 Munich-based whisky company Whic.de is a lot more than just a mailorder. Besides selling bottles and samples through their website, they also moderate a vivid community page on Facebook and operate as an independent bottler. Due to the high quality of their releases, they are quite renowned and respected in the latter field. The individual members of their various series, such as “Nymphs of Whisky”, “Architects of Taste” or “Sujet”, do usually get lots of praise from bloggers and customers alike. And many of them sell out quickly. In the following, I would like to introduce you to three new whiskies from Whic.de, namely two Scotchs by Ben Nevis and Glen Moray plus one Swede from Mackmyra. As they are all strictly limited (I would not be surprised if Whic.de only bought parts of the Ben Nevis cask, whereas the Mackmyra could also derive from a 30 litre reserve cask), you better act quick if they sound like worthy purchases to you.

Over the last couple of years, Swedish whisky makers Mackmyra have become much more than an insider’s tip. They are the trailblazers of the booming whisky movement in the Nordics. More and more often, we not only find original releases by them, but also independently bottled Macks. Like this peated Mackmyra 5yo, which is exclusively available via the Whic.de website. Its robust bouquet has apple compote, citrus zest, banana milk and cigarette smoke. Also some earthy and veggie scents (red beet) and a mineral note. When sipped, the røk (smoke) expands steadily. After a short while it covers the entire oral cavity. Underneath it, I find more plants and vegetables as well as baked goods. While the spirit billows over the tongue, it feels quite weighty. The lengthy finish has a good amount of smoke and earth as well as minerals, nettles and licorice. If I had not read it on the label, I would never have guessed that this whisky came from an oloroso cask. But that is secondary. Cause one way or another, this rough-around-the-edges Mackmyra 5yo rocks. I would recommend it to fans of Ardmore, Ledaig and peated Glenturret.

Ben Nevis is a distillery most people will already have heard of. After all, the seasoned Highlands unit shares its name with the highest mountain in Scotland. Their whiskies, however, are lesser known. As most of the distillery’s output goes into blends, both original and independent Ben Nevis releases are quite a seldom sight (compared to other distilleries from the region). So a bottling like this single cask Ben Nevis 17yo – which is part of the “Architects of Whisky” series – is both rare and sought after. In the nostrils, it starts off fresh and crisp with pineapple, pear, lime and camomile. Later, a thin layer of saw dust settles upon these fragrances. In the mouth, it is sweet and round but also massive and strong. Here, green and yellow fruits dominate. They are accompanied by honey, pineapple, cocoa, oranges and cream. Tasty stuff, for sure! The well-structured aftertaste is ongoing and memorable. Right after swallowing, the liquid is primarily fruity. With time, it gets more and more chocolatey. Slowly but surely, some spices make themselves noticed as well. The whisky stays with us for a long time, every second of which is an absolute treat! This awesome highlander marks a worthy finale to a top-quality whisky series!

Woah, this nymph ain’t no fragile being. She’s a dervish! Born at Glen Moray distillery in Speyside in 2007, she has a pretty frisky character. Scent-wise, she opens with a lovely sweetness: pancakes, marzipan, vanilla milk and blossoming clover. Then, fruity notes chime in. I get gooseberries, pears, lemons and green bananas. In the pleasing bouquest, I found the raised ABV to be nicely integrated. Taste-wise, I got mouthwatering notes of warm butter cake, sweet apple juice, soft caramel pudding and sugared almonds. On the palate, the alcohol appeared to be quite a bit stronger than in the nose. It snapped at me a few times, so I ended up taming this rackety nymph with a softening splash of water. The finish was pretty killer – both with and without water. After swallowing, the spirit got fresher. Mint and anis appeared. The fruitiness remained in the form of unripe peaches, bananas and apples. Due to its exceeding strength and vigorous nature, this 11-year-old Glen Moray was not the easiest of sips. But if you take the time to tame it, you will be greatly rewarded with a cracking Speysider from a merited distillery. 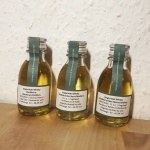 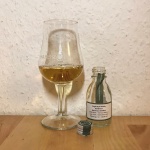 The dram (Mackmyra 5yo) 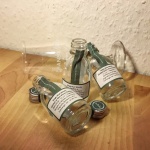 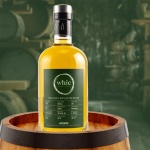 Promo shot of Mackmyra 5yo (taken from Whic.de)

Promo shot of Ben Nevis 17yo (taken from Whic.de)

Promo shot of Glen Moray 11yo (taken from Whic.de) 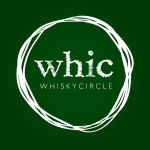 The logo (taken from Whic.de)