It is never too late to introduce a good whisky! Originally, I bought the new Kilchoman STR Cask Matured at Kiel Whisky Fair a few days before its official launch in Germany. This would have been a great opportunity to feature it on my blog directly on launch day. But somehow I let this chance slip by. So instead of being first to the party, I now stumble through the door two-and-a-half months late. Well, never mind. Cause one way or another, this peated single malt Scotch whisky from Islay’s family-owned farm distillery is an absolute treat. It was matured in so-called STR casks for seven years. “STR” stands for “shaved, toasted, recharred”. This special way of cultivating the wood was invented by the late Dr. Jim Swan, a man substantially involved in getting the Kilchoman distillery off the ground. This makes the STR Cask Matured all the more special. On the one hand, I find it beautiful to see part of Jim’s legacy manifest in such an outstanding dram. And on the other hand, I am happy that one of my fave distilleries came up with such a top-notch release! When I arrived at Kiel Whisky Fair, I did not intend to buy a Kilchoman because I had just purchased a 12-year-old single cask from them the week before. But when I sipped it at the booth of their German distributor Alba Import, I could not help but purchase a full bottle – so very much did I enjoy this whisky!

Eye: Orange-brown with swift, slender legs.
Nose: The nose is complex, rich and spicy. It is strong and well pronounced, but not over-powering. I get dried tobacco leaves, banana chips, pink pepper and rosehip tea as well as sweet dates and soft mango. The mix is accentuated by woody and mossy scents. The quintessential dose of smoke comes in the form of burning paper sheets and steaming tar.
Palate: Clover, nettles and wild honey produce an initial “veggie” sweetness. Then, a lot of bonfire smoke unfolds in the mouth. Beneath it, there is an underlying fruitiness from dark grapes, mangoes, bananas and lemons. Mineral notes and a nutty relish round the whisky off. The mouthfeel is more on the light side, but also full. When describing Kilchoman’s STR Cask Matured, the one word you want to use is “complex”. And if you are feeling chatty, you might want to add “smoky”, “fruity” and “tasty” as well.
Finish: Lasting! A big puff of peat smoke appears together with ground cocoa beans, dark cookie crumbs and a spoonful of wild honey. Vanilla pods, white peaches and brownish bananas make themselves known as well. And so does a savory caramel sweetness. 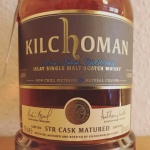 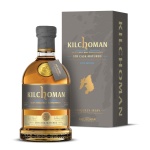