The recently released Summer Wit Barrel Aged marks ÜberQuell’s  second craft beer with extra maturation in a cask from Bulleit Bourbon. Before, the Hamburg-based mirco brewery already gave one of their annual Julebryg expressions a similar treatment. Since I really enjoyed the Summer Wit Barrel Aged, I not only took several bottles of it home, but also asked co-founder Axel Ohm and master brewer Tobias Hess a couple of questions about their latest creation.

BarleyMania: Cheers, guys and congrats on the release of Summer Wit Barrel Aged. For starters, can you give me some more context: How did the collaboration between ÜberQuell and Bulleit come to be? How many Bulleit casks do you have and how did you get hold of them? And what is the common denominator that makes a world-famous bourbon brand such a good fit for a Hamburg-based craft beer manufacture?

Axel Ohm: Before we opened the ÜberQuell brewery and restaurant in St. Pauli, we had already hand-picked our entire range of drinks. With five sommeliers among our rows, we knew quite well what beers we wanted to offer. But the other beverages were a bigger challenge, especially the spirits. To select the best non-alcoholic and alcoholic drinks, we did several blind tastings with our team and external experts – like Hendrik Thoma, for example, who helped us with the composition of our wine menu.

Shortly after we had opened our doors, we made the acquaintance of the Bulleit team. We invited them over to our place and paired their ryes and bourbons with our brews. At a tasting with friends, we then formed the idea of boilermakers with German craft beers complementing the differing Bulleit expressions. A couple of weeks later, we found two wooden Bulleit casks on our doorstep, shipped over from the US. And with that, we started to put our ideas for barrel-aged brews into practice. The spicy Danish x-mas beer Julebryg was our first such beverage; and the Belgian Summer Wit is our second.

BM: Usually when I stumble upon a barrel-aged craft beer, it is a very heavy one like an Imperial Stout or Porter. While I love these powerful chocolate, coffee or berry bombs, I was pleasantly surprised to learn that ÜberQuell went down a different road: Why did you pick a lean and refreshing Belgian Wit for this project? And how satisfied are you with the result?

Tobias Hess: That was exactly what we wanted to do – to break with the assumption that barrel-aged beers must always be strong and (mostly) dark. So when the time had come for the second filling of our Bulleit barrels, we put a light beer into them. With the help of the wood on the one hand and some special ingredients on the other, we created a delicate yet complex brew. I think we did a pretty decent job mingling the bourbon aromas from the cask with the spiciness of coriander seeds and pink pepper plus the fruitiness of orange peels and blueberries.

BM: The extra maturation is not the only thing that sets your Summer Wit Barrel Aged apart. Besides the usual ingredients, you also added orange zest, blueberries, coriander seeds and pink pepper to the recipe. Why did you go for these special additions and what effect did they have on the beer?

TH: Traditionally, a Belgian Wit or Blanche is brewed with coriander and orange zest as well as a proportion of unmalted wheat. When we decided upon a Wit, we did of course want to stay true to the original recipe. But we also wanted to add a modern touch. For that we chose a late, slightly increased hopping with Mandarina Bavaria (among others).

Now to the other ingredients: The pink pepper has been my favorite of mine for quite some time and I thought it would go very well with a lean, spicy beer. As the first results were truly eye-opening, we stuck with it. The pink pepper underlines the beer’s fruitiness and gives it a fine spiciness. The blueberries were added last. We also put them into the wooden barrel, where they constituted a fruity counterpart to the bourbon aromas. At first I thought about using stone fruits for this. While I was looking for sources to buy them, I stumbled across the blueberries. And all of a sudden I was convinced that they would be perfect for our Wit. After all, they are spicy and aromatic, too. And they give the beer a nice reddish color. So they not only boost the flavor, but also the look.

BM: Can you let me know a bit more about the interaction between the liquid and the wood? How long did you leave the beer in the barrel? How often did you check up on it and how did it develop over time? Was there anything special that you had to keep in mind during the maturation, e.g. in regard to storage conditions?

TH: Barrel maturation is a science of its own. For some, it is a microbiological nightmare. For others, a dream comes true when a membrane forms on the surface and various micro organisms set to work. For me, the key to success is remaining both relaxed and adventurous throughout the entire process. Hygiene is extremely important, too. And you are well advised to nourish and cherish the cask not only from the inside, but also from the outside.

In the case of our Wit, I speculated on a short maturation time right from the start. On the one hand, I did not want the bourbon aromas to become too dominant. On the other hand, I was afraid the beer could turn and become sour if we left it in the barrel for too long – after all, the brew was relatively light. Consequently, we took the beer out of the barrel after six weeks. During that time, I opened the cask three times to sample the liquid inside. That was always a super exciting moment… to experience first-hand how the beer had changed.

BM: Bulleit is not the only whisk(e)y brand that ÜberQuell has cooperated with. Among others, I have also attended Glenfiddich and The Scotch Malt Whisky Society tastings in your brew pub. What is the special chemistry between beer and whisk(e)y? And will ÜberQuell host more such events in the future?

AO: Of course! We are always open to make new tasting experiences and learn more about the sensory expressions and production methods of other beverages – for example via guided degustations. In the case of whiskey, you always have to take an ABV hurdle first. After that, you can familiarize yourself with the batch and understand “what’s in it”. As for the special chemistry between beer and whiskey, it might have to do with the fact that the initial production steps for both beverages are quite similar. And there is another thing that beer and whiskey have in common: both beer drinkers and whiskey fans will go home animated and satisfied after they enjoyed their favorite beverage in the ÜberQuell brewpub. 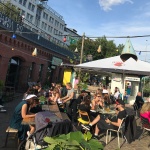 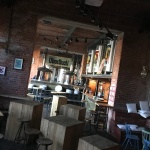 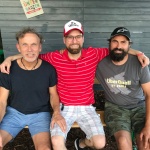