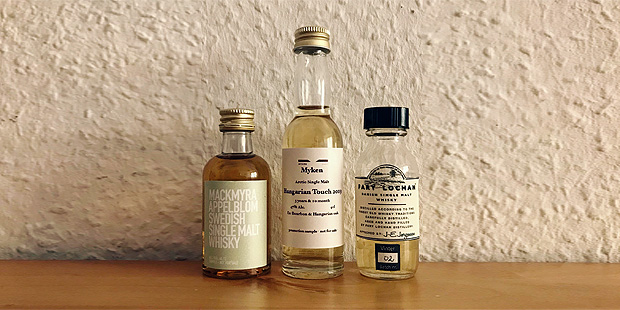 The northern vikings surely love their whisky. And these days, they not only buy good bottlings from abroad, but also produce them domestically. In 2019 each of the five nations of Scandinavia has at least one operating whisky distillery. This article will introduce you to selected whiskies from three of these countries, namely Sweden (Mackmyra), Norway (Myken) and Denmark (Fary Lochan). In regard to their make and character, the members of this trio are quite different from each other. However, there is one thing they all have in common: They give an impressive display of how well our friends up north have mastered the craft of whisky making!

Recently, my pal Aaron (who runs the Drams United blog) became a brand ambassador for Mackmyra. In any case, this is a really cool development. However, what makes it even cooler is the fact that he can now slip me Mackmyra samples whenever we meet. The first Swedish whisky I got from him is the new Äppelblom, finished in calvados casks – a treatment that clearly shows in the spirit’s immense fruitiness. When I draw it to my nose, I immediately sense a lovely, sweet apple juice note. It is complimented by shortcrust pastry, camomile tea and various yellow or orange fruits. The first sip is soft and smooth with all sorts of garden fruits (including a lot of green apples, of course). Additionally, I get vanilla, peach, clotted cream and butter cookies. The ongoing finish is fruity, creamy and a wee bit spicy. If I had to describe this dram with just one word, I would pick “savory” off the top of my head. Mackmyra’s Äppelblom is exactly the kind of whisky that would not survive the night if you invited three friends over and put the bottle in the middle of the table. To make sure that your stock lasts a bit longer, here is a pro tip: how about buying two Äppelbloms rather than one…!?

This is a debut for me: my first-ever whisky from Norway! Myken Destilleri was founded in 2014 on the eponymous island located 25 kilometers north of the Arctic Circle. During the first five years of Myken’s existence, I somehow missed to take notice of it. Luckily, this changed recently when Pinkernell’s Whisky Market became Myken’s distributor in Germany. From them, I got this 5cl miniature bottle of Hungarian Touch 2019, a single malt whisky matured in both American and Hungarian oak for 3 years and 10 months. It opens with a juicy, sweetish and slightly nutty bouquet in which I can make out quinces, almond tart, porridge with stewed apples and sunflower seeds. Plus some kind of a co-vibrating modeling clay note (that might come from the bourbon casks). In the mouth, the Hungarian Touch 2019 appears full and aromatic with a good sturdiness. Dried orange fruits (apricots, passion fruits, yellow plums) take the lead here alongside ground cocoa beans and wild berries. Again, the mix is rounded off by that bourbon-y note I already had in the nose. The whisky’s mid-length aftertaste has vanilla, wood, berries and even an ounce of cayenne pepper. Prior to this out-of-the-ordinary tasting experience, I would have said “Whisky from Norway? Never had one”. But now I am more like “Myken, count me in”!

Named after the four seasons, Fary Lochan’s core range expressions become peatier the colder it gets. Consequently, Vinter is the peatiest whisky in the Danish distillery’s portfolio. Though, “peaty” is not the correct term here. “Smoky” is more like it. Cause at Fary Lochan, the barley is dried over nettle smoke rather than peat fire. This adds a distinct nettle freshness to the otherwise fiery bouquet of the Fary Lochan Vinter Batch 2. Other aromas are sweet BBQ fumes, burnt cookies, mushy apples, brownish bananas and fir needles. Also chimney soot and citrus zest. In regard to its complexion and character, the spirit appears strong and confident. Here, sourish fruit notes mingle with baked goods and herbal smoke. Imagine a thick layer of maracuya yogurt spread across a butter biscuit with a perfumed cigarette butt stuck in it. When swallowed, the Vinter Batch 2 goes down smoothly. At first, the smoke is especially strong. Later, the sweetness and the fruitiness pierce through more and more; as do berries and dark chocolate graters. Sure thing: This exquisite whisky is highly recommended – especially, but not exclusively, to friends of smoky sips. 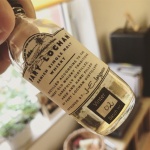 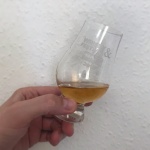 In the glass (Mackmyra Äppelblom) 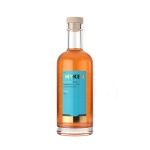