Three independent bottlings. Three different distilleries. Three individual flavor profiles. Three unique stories – squeezed into one blog post! Admittedly, on the first glimpse there is not much of a common denominator between the members of this tasting trio. Except the fact that they are all quality whiskies. And, quite frankly, what more do we need? So here we go with my notes for an Ardmore 20yo from The SMWS, a Miltonduff 6yo from The Barreliers and a Caol Ila 9yo from Whic. Slainte mhath, dear readers!

For their latest release with the label “Exclusively for Germany”, the SMWS got some help on board. Stefan Gabányi – a star of Munich’s vibrant bar circuit – selected this 20-year-old Ardmore from a variety of cask samples. Plus, he came up with the name and composed the official tasting notes. The latter, I will not recite here. Instead, I am happy to present you with a whisky description of my own: The nose is more on the subtle side. It opens with fresh green fruits, squeezed lemons, sweet licorice, liquid honey, cold ash and a bit of vanilla. The first sip feels heavy and somewhat dry. I get citrus, banana, sugar, barley and wasabi. At first all flavors are in perfect equilibrium. But the longer I keep the liquid in the mouth (and I would recommend you to spend some serious time with this sophisticated Highlander), the stronger the wasabi becomes. It is an uncommon but really awesome quality that I rarely sensed in a whisky before. During the finish, the whisky gets smokier. It leaves behind burning embers alongside sweetish heather, crumbly marzipan and the aforementioned wasabi bite. When you smell and sip this challenging Ardmore, it does not jump straight at you. Rather, it twists you around its finger bit by bit. My recommendation: Slow down, pause to think and focus all your senses on the dram. The number 66.158 will reward you aplenty by revealing its true greatness to you!

The Barreliers is a small indie bottler from Berlin run by two brothers, Alex and Chris. Every now and then, they launch a new single cask whisky. This 6 years old Miltonduff from a 1st fill ex-bourbon barrel is their second release ever. It went on sale in late 2017 and a few bottles are still available in The Barreliers’ online shop – once they are gone, the bottling will be sold out. Despite its youth and strength, this breezy Speysider is surprisingly soft to the nostrils. Its sweet and puffy bouquet offers vanilla crescents, pear slices, citrus zest and creamy white chocolate bonbons. Also a thin layer of fresh saw dust. In the mouth, the whisky begins to flex its muscles. The 62.1 per cent ABV produces a noticeable but not overpowering burn. The honest flavor profile is milky, fruity and sweet. I get good amounts of peaches, grapes and pineapples covered in whipped cream and vanilla sauce. The aftertaste is pleasing. It has rice pudding with fruit sauce as well as brioche dough, pineapple juice and lemon-flavored wine gums. This young Miltonduff shows us one thing: To strike an impression, a whisky must not necessarily be really old or have a special maturation or come from a fabled distillery. It simply has to be good.

There is a war raging around us. However, it is not fought with guns and bullets but with smoke and phenols. I am talking, of course, about the “War of the Peat”. It got started by Whic last month with the release of an earthy, meaty Ballechin 12yo. Now, it continues with the launch of this old-school Caol Ila 9yo, which reeks of thick, condensed smoke. Additionally, I make out sizzling wood, BBQ-ed fish, dried sea weed, mushy fruits and greasy motor oil. The smell makes me wonder: Did this invader really arrive via UFO? Judging by its aroma, it might as well have come here in a submarine! The mouth is sweeter. It has raisin bread, vanilla milk, soft apple, fresh oysters and full-on Islay smoke. Feisty in nature, this whisky bites like a piranha with a metal jaw. The aftertaste – or shall I rather say aftermath – is lengthy, explosive and very peaty. Once I have proceeded to the center of the full smoke cloud it leaves behind, I taste marzipan pastry and milky cream. Uncommonly for a Caol Ila, the peatiness develops a slight iodine note during the finish. Character-wise, this dram is fumy, oily, metallic, strong and uncompromising! Another forceful strike from the Whic armada! 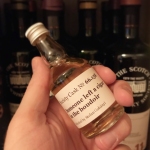 The sample (Ardmore 20yo by The SMWS)

The sample (Miltonduff 6yo by The Barreliers) 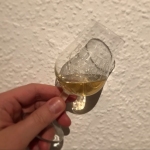 In the glass (Caol Ila 9yo by Whic.de)