The “War of the Peat” is on! Earlier this month, the first of thirteen high-percentage invaders has left the womb of the Whic mothership. His mission: To show the dramming community the uncommon, extreme and somewhat offbeat side of smoky whisky. Arguably, no other kind of dram can produce such unusual smells and tastes as one that falls into the “Heavily peated” category. The first Whic soldier to carry this message into the world is a 12-year-old Ballechin (i.e. a peated Edradour) from a refill sherry hogshead. It comes with a somber sci-fi design, a forceful ABV and a “raunchily” sherried character – besides a lot of dark smoke, it also shoots roasted meat, earthy turnips and slightly fermented fruits into our direction. As someone with a soft spot for edgy sips, I am more than happy to surrender to this grimy gatecrasher from another galaxy!

Eye: The invader’s liquid shell is made from brownish, weather-beaten brass.
Nose: You can already smell this Highland-spawned tri-pod’s arrival from afar. Gleaming coal, burnt pastry and heavy smoke go first, accompanied by a slightly sulphuric odor. These fiery aromas mingle with baked chestnuts, brown bananas and squashed brambles. Yes, there are also some fruity notes in there – but they are mushy and even a bit moldy. Underneath is the thin sweetness of stale Pepsi cola. And around all, there is a dry, powdery force field made from nutmeg and parsley root.
Palate: Whic’s first invader lures you in with an initial cherry sweetness. But as soon as you have fallen for that trap, he fires at you with smoking guns: soot and ash form the first round, burgundy ham and honey marinade the second. Next comes a slight chili hotness, followed by deep red berries. Again, there is this peculiar sweetness that reminds me of a “forgotten” glass of Pepsi cola. The whisky has a strong, well defined body and the high-percentage ABV is mostly balanced; but occasionally it lashes out.
Finish: The final battle is long and tough. Mushy apricots clash with parched blueberries. Hot ash rains down on moist heather. Plums, malt, licorice and beetroot make themselves known. The smoke cloud dispenses slowly… but whom will we see when the fog of war has cleared? A brave drammer holding his ground or an over-proof invader from planet Ed-RA’d0ur? You tell me once you have emptied your glass! 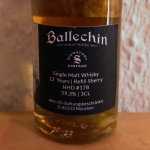 The label (of the sample) 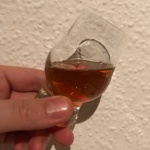