I love The Scotch Malt Whisky Society for many reasons. First, the Edinburgh-based dramming club has a real talent for bottling outstanding whiskies and other spirits. Second, there are just so many wonderful people involved with The Society – be it employees, partners or members. And third, The SMWS sets up one highly enjoyable event after the other for members and non-members alike. In my hometown of Hamburg, they have something new planned almost every week. The list is long: monthly outturn tastings, out-of-band special tastings, regulars’ tables, food pairings, collaborations with distilleries and breweries and much more! The last Society event I visited was an open bar aboard the Cap San Diego, a long-serving museum ship at anchor in the harbor of Hamburg. The event itself was neither fancy nor flamboyant nor exclusive. It was just one thing: good, honest fun!

When my friends and I arrived at the scene, the reasonably sized tasting room was already pretty packed. Further back at the bar, the hosts – local brand ambassador Thom and PR manager Matthias – were already busy speaking to the visitors and pouring them drams. All in all, there were 15 bottles to choose from. Most of them were single malts between seven and 25 years. Additionally, there was also a single cask rum and the recently released blended malt, The Beach Comber. In the one-and-a-half hours that I spent there, I savored three drams. I started with a 25-year-old Glenlossie called “Jungle slippers” (46.72), continued a 7-year-old St. George’s Distillery aka The English Whisky Co. called “How to kill your dragon” (137.7) and ended with a 6-year-old Jamaica Rum called “Feeling Irie” (R11.7). The Glenlossie was immensely fruity with pineapple, mango, orange and all kinds of other exotic fruits. The St. George’s was a real peat monster with loads of phenols, oils, tar and ash. Last but not least, the rum was hefty, dry and a lot less sweet than I expected. While I really liked all three of these sips, my favorite was the Englander. Previously, I had only tried a couple of unpeated whiskies from St. George’s Distillery. But thanks to The SMWS I have now learned that they make top-quality smokers, too!

All in all, I found the open SMWS bar aboard the Cap San Diego to be a beautiful event. During the time of my visit, the mood was chilled and the guests were in good spirits. As there was neither loud music nor smoking (apart from a couple of peated whiskies, of course), some folks even brought their kids or dogs along. Everybody was welcome. To me, this easy-going get-together proved once again that whisky is more than just a drink: It is a means to unite people and help them have a lovely time. Cheers to everybody at The Scotch Malt Whisky Society and Alle Vögel Fliegen Hoch for setting up this little whisky gathering. I am already looking forward to meet you guys again at another SMWS event … hopefully soon! 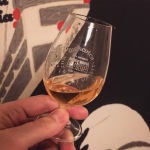 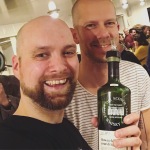