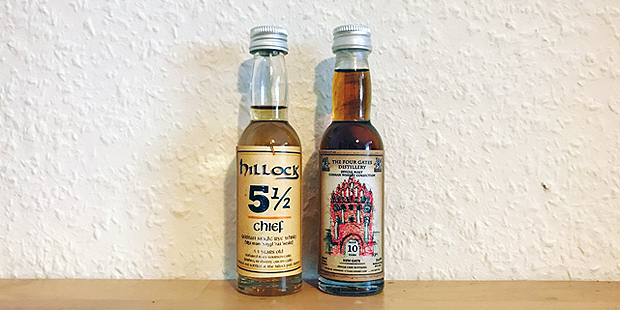 Whisky made in Germany – that’s far more than an insider’s tip these days! All over my home country, go-getting distillers put their malt, grain and rye spirit into casks and develop it to become whisky or whiskey (unlike Scotland or Ireland, there is no unified spelling here in Germany; some put an “e” in there, while others don’t). Thanks to my blogging buddies Aaron from Drams United and Luisa from VossnWhisky, I recently got the chance to try two pretty special pours from Germany. Aaron gave me a sample of Hillock 5 1/2 Chief by Habbel Distillery. It is a smooth and spicy rye whisky with a finish in a Cream sherry cask. Luisa sent me a mini bottle of New Gate 10yo SC, a dark-as-night sherry monster from a secret distillery in the federal state of Brandenburg. It marks the kick-off to a new line of indie bottlings launched by a local whisky shop called The Quaich. Below, you find my notes for both of these whiskies. Enjoy the read and if you got another minute or two, feel free to leave a comment and let me know which drams from my home country you have already sipped; and how you liked ’em!

This is a novelty for me. I do not think that I ever had a Cream-finished rye in the glass before! For the context: Cream is a medium sweet sherry variety that is created by “sweetening” up Oloroso, e. g. by vatting it with PX. To give their Hillock 5 1/2 Chief a special touch, the folks at Habbel Distillery put their German single rye whisky into a Cream cask for the remainder of its days. An exciting move that produced an excellent result! The Chief’s nose is nutty and creamy. It has stewed apples, shredded grain, moist wood, crushed pepper and wild honey with comparatively little sweetness. Additionally, I get mushy peaches and other yellow fruits. Overall, I find the scents to lean more towards the dry side; as a whole, the bouqet feels well-rounded and appealing to me. The first sip has a bit more punch than the nose. It provides lots of porridge with raisins as well as licorice sticks, caramel pudding and apple slices – all underpinned by a spicy bite. Here and there, I also get an exotic note that reminds me of pineapple juice from a freshly opened can. Some young oak, some citrus zest and some orange jelly round the whole thing off in a nice way. The finish is quite lenghty. It develops a delicate fruitiness that shows itself in the form of sweet, juicy grapes. Other parting gifts are cereals, sultanas, pepper corns and, somewhat unusual, gummi bears.

First off, an explanation: Despite the fact that the label reads “The Four Gates Distillery”, this is not a whisky from a production site bearing that name. It is an indie bottling of a 10 years old whisky from a secret German distillery, which got released by a whisky shop called The Quaich. Why it says “distillery” on the label, I do not know … Anyway, on with the notes: The first thing I noticed when I filled my glass was the color. Wow, this whisky is really dark! I can see by the shade alone that the sherry cask, in which the New Gate 10yo SC spent half its maturation time, must have been very active. And indeed – this notion is confirmed by the nosing and the tasting. In the nostrils, I get lots of juicy orange, plum jelly and cooked fruits. Underneath, there is the sound foundation of cocoa and mocha. Additionally, I also sense a perfume-y quality and a pretty nice “dusty cushion” note. Somewhere far in the back, I might even smell a hint of cigar puff. On the palate, the motto is “sherry to the max”! The near-black liquid is full of toasted oak, squashed brambles, dark licorice and black currant. Furthermore, I get a pomelo bitterness and a coffee ground tartness. Sweetness? Not so much … And quite surprisingly, the spirit feels less heavy and chewy than I had expected. It is medium-weight and it has a nice flow. The lasting finish is – again – dark, strong and brut. It offers lotsa wood, bramble and tobacco as well as powdered cinnamon, extinguished match sticks and rain-wetted stones. There is no doubt about it: This is a massive, full-on sherry monster made in Germany!