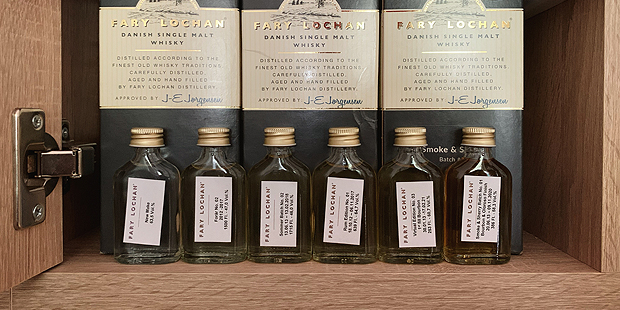 Started in 2009, Fary Lochan is Denmark’s first distillery that was custom-built from scratch for whisky making. In the conception and realization of the place, its late founder and visionary Jens-Erik Jørgensen left nothing to chance. His attention to detail and his passion for the water of life reflect in every aspect of the distillery – from the quality-focused philosophy to the hand-made processes to the unique set-up. Two anecdotes underline this: First, Fary Lochan has a pagoda, even though this type of roof does no longer serve a purpose in modern times. Yet, Jens-Erik insisted that a whisky distillery needed such an architectural detail no matter what. And second, Jens-Erik put goldfish into the small lake nearby for a very concrete reason: On average, a goldfish takes about three years to fully develop its color – just as whisky takes three years to come of age. I find the reasoning behind this absolutely wonderful!

To this day, Fary Lochan is family-owned. The site is currently managed by Jens-Erik’s son Morten. And everyone else in the family is involved in the distillery as well. In all they do, the folks at Fary Lochan display an utmost amount of diligence, skill and consciousness of tradition; spiced up with a creative spark and an eagerness to innovate. Using only local ingredients, they distill their whisky on specially made Forsythys stills before they let it rest in top-class casks. The latter are mainly sourced from Speyside Cooperage. Anything that can be done by hand throughout the journey from grain to bottle, they actually do by hand. This shows! The distillery’s sturdy, weighty and expressive single malt Danish whisky is absolutely sublime. I would even go as far as calling it one of my Top 5 spirits in the world right now. And – spoiler alert! – the recent Fary Lochan online tasting, which I was lucky to participate in, further underlined this notion.

The two-hour event was organized by the distillery’s German importer Prineus GmbH and run by former Tour Guide Nadia and Brewmaster Henry. I have written “former Tour Guide” because Nadja has a different job now. Yet, she told us that she simply loves Fary Lochan so much that she comes back regularly to show people around or – as was the case here – host a tasting. 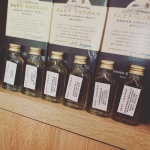 The evening’s line-up consisted of six samples. While we sipped them, Nadia and Henry took us on a virtual walk through the distillery. For this, they had prepared a cool video, which they stopped time and again to share a dram with us. The first spirit to stimulate our taste buds was the New Make. In Fary Lochan’s case, it is very heavy and oily with lots of grain, pastry, toffee, cream and licorice. Additionally, I also made out a good amount of yummy chocolate and an ounce of mild but accentuating spice. It is absolutely no surprise that – with a little time in oak – an amazing whisky emerges from this well-crafted liquid.

Speaking of which: After the New Make, we continued with five fully matured whiskies aged between four and eight years. The first was the bright and brisk Sommer Batch No. 2. True to its name, this comparatively light and easy palate pleaser was sunshine in the glass. Among others, it provided prancing notes of vanilla crescents and apple puree as well as blossoming clover, soft honey, crisp pear, spritzy citrus and white choc muffins. Whereas Fary Lochan’s Sommer bottlings have no smoke at all, their Forår whiskies are made with five per cent peated barley. This results in a delicate, underlying smokiness (approx. 1.5 PPM). As the only distillery in the world, Fary Lochan dries its barley over burnt nettles. This produces lighter and greener fumes than e.g. Highland or even Islay peat. Regarding its flavor profile, the multi-layered Forår Batch No. 2 was predominantly fruity, juicy, spicy and grassy. From underneath, a whiff of nettle smoke made itself known, too. It was rather shy on the nose, but became stronger on the palate as well as during the finish.

Our fourth dram of the evening was the creamy, full-bodied and truly amazing Virtuel Edition No. 3, which I already had in another Fary Lochan tasting in March. I loved it as much this time as I did the first time! Afterwards came my personal highlight of the tasting, namely the Rum Edition No. 1. With an ABV of 64.7 per cent, this sweet and fruity powerhouse was even stronger than the New Make! At this point, Fary Lochan’s Chairman and CCO Thomas Smidt-Kaerby tuned in to give an explanation: The Rum Edition No. 1 is made from triple-distilled spirit, which Jens-Erik produced as an experiment several years ago. Thus, it went into the cask with a higher strength than the regular New Make. During the degustation, the whisky’s immense power neither burnt in my nostrils nor on my tongue. For such a high-percenter, it was surprisingly smooth and superbly leveled. Flavor-wise, it brimmed with raisins, apples, oranges, grapes and pears. Also puff pastry, caramel pudding and white chocolate. Somewhere buried in the aftertaste, I even made out a pinch of salt.

Our sixth and final dram of the evening was the new Smoke & Sherry No. 1. In case of this Oloroso-finished small batch release, writing tasting notes is easy: the name is spot-on and gives a perfect idea of what to expect here. The whisky, which was the darkest spirit in the line-up, opened with scents of BBQ-ed ribs with honey coating as well as red berries, black pepper and chewy toffee. The palate was mouth-watering with strawberry, plum, cherry, smoke and all sorts of sweet treats. The Oloroso-influence was strong but not overpowering. All these notes culminated in a very long and beautifully designed finish. While I would still pick the Rum Edition No. 1 as my personal highlight of the tasting, many of the other participants named the Smoke & Sherry No. 1 as their favorite. In the end, however, this all boiled down to personal taste and form of the day. Cause in total, we had not one or two brilliant drinks during the tasting, but six! 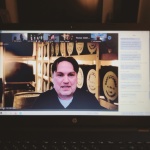 In the glass (New Make)

*** I was kindly invited to the tasting by Prineus GmbH. Thank you. ***