For as long as I can remember, I have felt attracted to the dark, the grotesque, and the obscure. No matter in what form it appears – e.g., a gothic novel, a fright flick, or a horror-themed heavy metal album – I always find the supernatural highly intriguing. Against this background, it should not come as a surprise that I have also been very curious about FABLE Whisky right from the start. When this up-and-coming indie bottler first appeared on the scene in March of 2021, they instantly won me over as a fan! Both their visuals and their storytelling are pretty much unparalleled in the whisky world; each release comes with a stunning Tim-Burton’esque artwork from Hugo L. Cuellar and tells an episode of the Scottish folk tale “The Ghost Piper of Clanyard Bay”. My mission was clear: I needed to try some of FABLE’s releases and see if the whisky could really match the presentation in terms of class and awesomeness. Based on this Dailuaine 11 Years Old (plus a handful of other expressions I sipped at last year’s Bottle Market festival), I can now conclude that this is 100 per cent true! FABLE, who predominantly source their whiskies from ex-bourbon casks to preserve the original distillery character as much as possible, show great talent in picking drams to remember. In their first year of activity they have already gained a strong foothold in the scene, releasing twelve individual bottlings and building a powerful presence – online as well as offline. Going forth, I am sure that they will further advance on this path; and I as they do, I will surely be there to support them as a fan and follower!

Eye: Palid moonlight.
Nose: The bouquet’s bright vanilla notes interplay beautifully with the sour-ish aromas of crisp apples and the dry-ish whiffs of cut hay. Whereas these scents take the lead, they are not the only sensations I find in this 12-year-old single malt from time-honored Dailuaine Distillery (which was founded in Speyside in 1852). Additionally, I also make out lemon grass, nutmeg, cinnamon, and tree bark. Here and there, a fruity splash (melon, peach) adds a well-accentuated spot of color.
Palate: Strong body, good strength, playful temper, lotsa flavor! Again, a sweet vanilla note goes first. This time, it is directly accompanied by a sugary sweetness. Afterwards, more notes join in: Danish pastry, coconut graters, white-choc drops, and clotted cream. There’s also a light and delicate fruitiness, which appears in the form of grapes, pears, apples, and gooseberries. The cask strength ABV makes itself known, too, albeit not in a forceful way: The whisky’s vigorosity underpins the other flavors and lifts them up, thus letting them shine even brighter. To me, FABLE Whisky’s Dailuaine 11 Years Old marks a posterbook example of how well a classic, refill ex-Bourbon cask can shape a quality malt!
Finish: During the prolonged aftertaste, the whisky bids its farewells in a very classy way. It leaves behind a harmonious assortment of sweet, grassy, and fruity flavors: From butter toast with clover honey spread to white chocolate mousse with pistachio crumbs to elderflower juice with white wine spritz. As a dedicated lover of traditional bourbon-matured Scotch, I can only come to one conclusion here: This is whisky’s fabulously good! 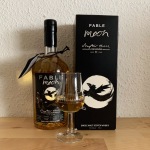 *** I bought the bottle myself as a regular customer. ***