One after another, my favorite whisky fairs are now reawakening from their pandemic-caused hiatus. At the end of 2021, I already had the pleasure of visiting Bottle Market in Bremen and Bordershop Whisky & Ron Festival in Puttgarden again. And this month I got to return to another dramming event I hold dear: Kiel Whisky Fair. The nice atmosphere, good organization, quality line-up, and close proximity to my home town have made this small festival a must for me in recent years. Unlike before, the 2022 edition of Kiel Whisky Fair took place at a different location, namely the foyer and showroom of the city’s Chamber of Commerce and Industry. It was easy-to-reach, spacious, and overall well-suited to hold a happening like this. Sadly, it appears to be a one-off choice because the premises are usually not considered to be used as an event location … so let’s see where Kiel Whisky Fair will take place next year. But now, let’s talk about this year …

My first stop was the booth of Schlumberger Spirits, where I met my sister-in-law Nicole and my brother-in-law Aaron (who writes about whisky at Drams United). After a short talk, I ordered my first dram. To get the ball rolling, I picked the elegant Benromach Organic. I have fond memories of the earlier batches; and the current one was just as clean, leveled, and good as I had expected it to be. Next up, I hopped over to Bremer Spirituosen Contor. Usually at fairs, I focus on their Douglas Laing bottles. But this time, I went for something different: Writers’ Tears Single Pot Still from Ireland. It was both palatable and energetic, offering an exciting mix of malt, grain, toffee, pastry, and grass. Another cool stop was the stand of Gradl’s Whiskyfässla, where I tried a special sip by Germany-based Elch Whisky. The Stout Finish expression was specifically bottled for Kiel Whisky Fair. With a cask strength ABV of 57.2 per cent, the 5-year-old peated single malt whisky packed a good punch. Taste-wise, it provided lots of oily smoke and soft fruits alongside barley sugar, vanilla pudding, and lemon icing. This puffy powerhouse showed (once more) that there is lots of fine whisky being made in my home country!

Of all the companies exhibiting their products at the fest, I spent the longest time with Prineus GmbH (which is also the German distributor of a distillery especially close to my heart, namely Fary Lochan from Denmark). Since I have a ton of Fary Lochan releases at home, however, I did not order any Danish whisky in Kiel. Still, I found many gems in Prineus’ rich assortment. Among others, I tried a superb Glen Spey 12 Years Old by FABLE Whisky called “Chapter Eleven: Ghost” (brimming with cotton candy, apple puree, clover blossom, and citrus peel). Also, I had two out-of-this-world single casks by Lindores Abbey Distillery. Though each member of the duo was just three years old, they both stunned me with incredible depth, development, complexity, and color. In the end, I took home the one with a port/sherry double maturation. But I could just as well have taken the sister release that came to be in two different sherry casks … Later, I also attended a cool Lindores Abbey tasting. There, Prineus’ managing director Gerd treated his guests to three top-quality drams: a core range expression (permanently available), a warehouse sample (not for purchase), and a single cask bottling (strictly limited). Each pour underlined just how good of a distillery Lindores Abbey is and how bright a future it has ahead of itself! 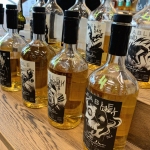 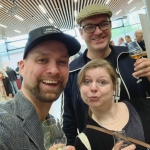 Besides Lindores Abbey, there was another Lowlands unit that blew me away that day. I am speaking of Fife-based Kingsbarns Distillery, whose recent “Distillery Reserve” I drank over at the Vibrant Stills booth. One sip in, I already knew that I had to buy a full bottle! The multi-layered spirit was partly matured in 1st-fill STR barriques and partly ripened in 1st-fill ex-Bourbon barrels. It was sweet, strong, and stimulating with lots of vanilla pod in the nose, strawberry milkshake on the palate, and blueberry muffin in the finish. For the few minutes that the dram remained in my glass, it sent me straight to whisky heaven! And I continued soaring high. Cause when I returned to the Schlumberger stall, I experienced another highlight in the form of a 6-year-old Penderyn Welsh Whisky sourced from a single Amontillado sherry cask. While I savored it, I had a nice conversation with Penderyn’s German brand ambassador Bastian. According to him, the bottling delivered exactly what you would expect from a whisky with such a maturation history. I found lots of delicate scents and flavors in it: dried fruits, crunchy grapes, sliced lemons, armotic zests, mild cinnamon, accentuating oak, fresh-poured cappuchino, sweet cocoa powder. Penderyn’s masterfully made destillate gave all of these notes a perfect stage to appear on … and shine!

One last whisky I would like to tell you about is the terrific Williamson 2010/2021 by Long Valley Selection (the indie bottling label of Swiss single malt distillery Langatun). Bottled at 50 per cent ABV, this tea-spooned South Islay treasure came along very lean and sophisticated. It gave impressive testimony of just how versatile a dram emerges from the long-standing unit that prides itself in producing “the most richly flavoured of all Scotch whiskies”. I was especially baffled by the many layers of peat smoke in it: there was sweet tobacco puff, blackened wood char, and – of course – also some iodine-laden hospital smack. Other aromas included briny sea spray, moist stone, green paprika, and garden fruit all-sorts.

After five hours of dramming and exploring, it was time for me to leave. After all, I had a train to Hamburg to catch. So I took one last round, said my good-byes, and headed back to the central station. Since I still had a 20-minute walk ahead of me, I bought a final dram to keep me company on my stroll through the city. My choice fell on FABLE’s Caol Ila 12 Years Old monikered “Chapter One: Clanyard”. Since my palate was not super-fit anymore and since I also did not have time to stop and type notes into my phone, I cannot provide you with a detailed description here. All I managed to write down was “Islay galore”! And somehow I find these to be nice closing words for my article. So, before I call it a quits, let me remember that glorious Caol Ila once more and reiterate: “Islay galore”! 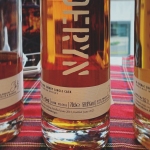 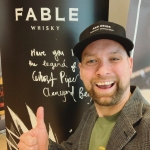 *** I visited the event as a regular guest. I paid for many
drams myself, but got some freebies, too. ***