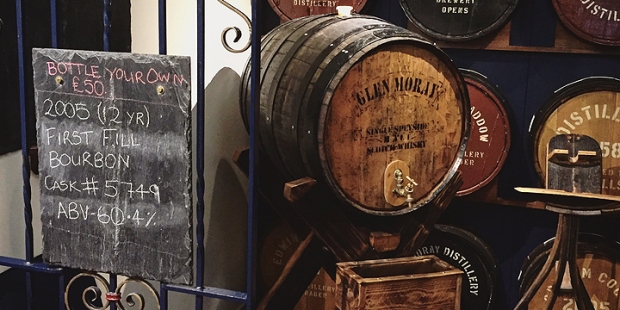 The fine folks at Glen Moray say about themselves that they are “not your usual Speyside distillery”. And indeed, the wonderful experience they provide is everything but ordinary. Neither are their prices: The 60-minute tour including two complementary drams costs you no more than a fiver. The “Exlusive Tasting” consisting of the current distillery bottling and three 23-year-olds with different finishes can be enjoyed for as little as 20 pounds. And the hand-filled (which at the time of my visit was a 12yo from a 1st fill bourbon barrel) is available for a mere 50 GBP. When I complemented the Assistant Manager of the Visitor Centre, Emma, on those very friendly prices, she told me that “being approachable” is a key pillar of Glen Moray’s success. “Most people get to know us via our pretty affordable entry-level whiskies”, she said. “They like them, so they stick around for more”. Not surprisingly, this is exactly how I got acquainted with the distillery as well. The first Glen Moray I ever bought was the Port Cask Finish, which I was lucky to grab on sale for 20 quid.

Our tour was led by Io from the Visitor Centre. Throughout the 60-minute experience, she was accompanied by Callum, who is currently doing an apprenticeship at Glen Moray. We were allowed to take photos everywhere except for the Mill House, where the distillery’s trusty ol’ Porteus mill has been turning grain into grist for 54 years and counting. Having automated almot all steps of their production, Glen Moray was one of the most modernized and tech-centered distilleries I visited so far. While some people might consider the strong reliance on machines and computers a little “unromantic”, I found it pretty interesting. The way I see it, great whisky is great whisky. Some of it comes from high-output powerhouses like Glen Moray (who currently produce ~5.7 million litres of spirit per year) and some of it comes from smaller units that follow a slightly more old-school approach. But at the end of the day, both of it is great whisky.

When I reminisce my stroll through Glen Moray’s production halls, there are two stops that I have particularly vivid memories of. One is the Still House in which the six working spirit stills (the wash stills are located elsewhere on the premises) produced one helluva noise and heat. The other is the old Warehouse #1, where the distillery team put up some pretty cool gadgets for their visitors to check out. For example, there were two sherry casks (on 1st fill and one re-fill) with transparent bottoms and lids. Standing before them, we could see the reddish liquid inside and compare, among others, the hue and the filling level of the pair. Furthermore, the Glen Moray team put ten (filled!) casks on display, all of which were of different make and heritage. The selection included classic whisky containers like ex-bourbon or sherry casks as well as experimental vessels that previously contained Scottish ale or cidre… and everything in between! We were allowed to open all of them and stick our noses in to get an understanding of what a certain kind of wood does to the liquid it enshrines. That was a really fun experience and I did not leave before I had sniffed each and every one of them. Next time I visit, I will bring a straw too… ☺

During the conclusive tasting of two Glen Moray expressions, I picked the Classic and the Port Cask Finish. If you fancied something with an age statement, you could also have selected the 12yo or the 15yo instead of the Classic. The duo of sweet and fruity Speysiders I had chosen was really delightful and paved the way for the quartet of cask strength whiskies that followed next. As said in the beginning of this post, the “Exclusive Tasting” contained a total of four drams: The current hand-filled plus three Vintage 1994s drawn from bourbon, sherry and Islay casks. I am not exaggerating when I say that all of these top-level bottlings were absolute treats! Unlike the Norwegian curling team that sat besides us and went straight from the tasting to their next match, my girlfriend and I did not have anything else planned for the evening. So we took our time to savor the precious pours in front of us without haste. And once we were done, we completed our visit to Glen Moray with a little shopping tour in the Distillery Shop, purchasing a bottle of the hand-filled and some souvenirs for friends of ours. In total, we stayed for more than three hours and I am sure we would have remained at the Elgin-based distillery even longer if they had not closed at 5pm. 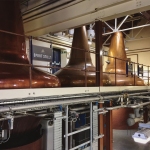 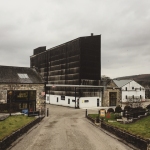 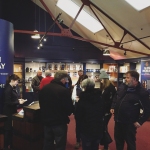 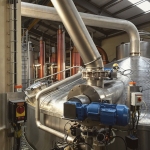 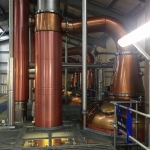 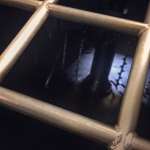 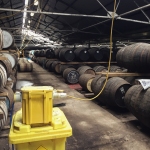 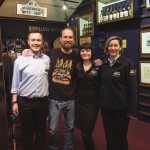 Me w/ the Glen Moray team 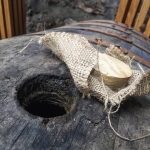 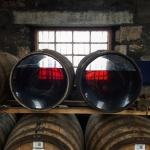 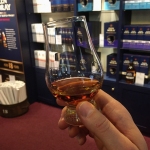 In the glass (Sherry Finish) 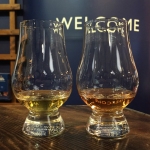 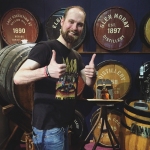 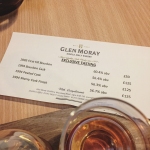 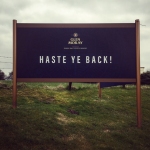