Built in 2009, Fary Lochan Distillery ranks among the oldest whisky production sites in Denmark. It is also one of only a few such locations that were custom-made for this purpose (many other Danish distilleries are converted farms or breweries). At first, however, Fary Lochan’s late founder Jens-Erik Jørgensen did not go all in. He started out making whisky as a hobby. Only when he saw the potential of his spirit, he decided to take it one step further and build his own distillery. So he purchased a patch of land in the small village of Farre near Veijle and established Fary Lochan. Today, three years after Jan-Erik’s passing, the distillery is run by his kids Morten, Tine and Thomas as well as their mother Anne.

My girlfriend Nadine and I went there on a Tuesday at 11 am. The drive through the Danish countryside was relaxed and the destination was easy to find. Shortly after our arrival, we received a warm welcome from Thomas, who currently works at Fary Lochan two days a week. The rest of the time, he runs a travel agency in Aarhus. The first thing he showed us was the still house, which accomodates two wee-sized spirit stills by Forsyths (containing 200 litres and 300 litres). Getting these beauties over from Scotland was neither easy nor cheap. But according to Thomas, bona fide Forsyths stills were a must-have for Jan-Erik. “They are simply the best,” he argued. As our tour continued, we also saw the brewmaster’s room, the second still house (with the wash still), the malt mill, the bottling plant, the warehouses, the storage room and the gift shop. Due to the unique build-up of Fary Lochan, most of these facilities are located in individual buldings – instead of one large structure, Fary Lochan is an assemblage of small huts that are connected via subterranean pipes and cellars (the latter of which hold most of the slumbering casks). This is a really cool concept that I have not seen anywhere else before.

Another spot I found pretty cool was the show room, where the distillery team sometimes hosts tastings or concerts. In the middle of the room, there is a small set of stairs that leads up to a tiny oberservation space underneath a pagoda. Yes, that is right. Back when he planned the construction of Fary Lochan, Jens-Erik reasoned that a whisky distillery should have a pagoda – even if it does not serve the same purpose as it did back in the day. I really like this kind of thinking!

While he showed us around, Thomas filled us in on the history and philosophy of Fary Lochan. Always aiming for the very best quality, him and his family only use first class ingredients for their whisky (most of which they grow themselves or purchase regionally). Plus, they carry out all work steps by hand. A good example of this is their peated whisky that makes for 10 per cent of their total output: They buy the barley from a local farmer and do the malting themselves, drying the germinating kernel over stinging nettle smoke. The plants, they pick in a close-by forest during the summer months. At the end of the two-part distillation procedure, they pour their rich and oily new make into top-grade casks purchased from Speyside Cooperage in Scotland. After a maturation time of four to five years, they fill the whisky into bottles and put the labels on by hand. From start to finish, each batch of Fary Lochan whisky is a true labor of love.

Our visit to the distillery ended with a small tasting of Fary Lochan’s new make plus two wonderful drams, namely the fruity Summer and the smoky Winter. The distillery names its core range expressions after the four seasons; in these bottlings the smokiness increases from Spring to Summer to Autumn to Winter. I enjoyed the drams very much and ended up buying a full bottle of the Winter as well as a miniature of the sold-out Sherry Matured with a finish in an Ardbeg cask. Nadine also put a bottle of Wine Liquor into the shopping bag, because she loved the fact that the Fary Lochan team grows the grapes for it on the distillery premises.

If you have stayed with me and my article this far, you will know that I really had a fabulous time at Fary Lochan Distillery. While I had already heard the name before, I neither knew the people nor the product prior to this trip. Now that I am acquainted with both, I can say with confidence: If you ever needed a good reason to travel up north, visiting Fary Lochan it is! 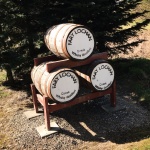 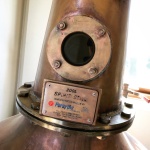 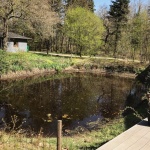 The view from the pagoda 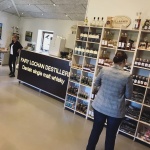 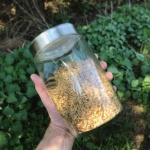 Me w/ the distillery team