So far, one of my absolute whisky highlights of the year is “Dramlet: the Dark Prince of Denmark!” by Fary Lochan and The Scotch Malt Whisky Society. From the flavor profile and the maturation details to the back story and the symbolical value, everything about this release screamed “Awesome!” into my ears with a hundred thundering decibels! When I finally got around to try it, “Dramlet” not only met but even surpassed my expectations. Naturally, I got curious to learn more about it. So I reached out to Fary Lochan’s chairman and chief commercial officer Thomas Smidt-Kjærby, whom I first met in April of this year. Back then, he showed my girlfriend Dini and me around the Fary Lochan premises. Now, he talked with me about “Dramlet”. I hope you enjoy reading this interview as much as I enjoyed conducting it. Skål, my friends – and harken the tale of “the Dark Prince of Denmark”!

BarleyMania: Congrats on the release of “Dramlet: the Dark Prince of Denmark!”. It is both the first indie bottling from Fary Lochan and the first Danish whisky from The SMWS. How did the connection between you guys and the Edinburgh-based independent bottler come to be? Who contacted who initially? How long has the release of “Dramlet” been in the making?

Thomas Smidt-Kjærby: When we started the distillery, we had no plans to sell any of our casks to independent bottlers… ever! There was, however, one exception: In the unlikely case that The Scotch Malt Whisky Society would contact us about this, we would give it some thought. As fate would have it, this is exactly what happened around five years ago, when Fary Lochan’s founder Jens-Erik Joergensen was still alive. Over time, he became friends with The SMWS’ manager and brand ambassador in Denmark, Thomas Korsgaard. Since Thomas was very fond of Fary Lochan and the way we did things, he eventually asked Jens-Erik if he could imagine selling a cask to The Society.

As this was such a flattering request, Jens-Erik replied that he would consider it. However, the cask had to wait until he himself was 100 per cent satisfied with the taste, maturation and quality. Unfortunately, Jens-Erik passed away before he could fulfill the deal with The SMWS himself. So it was up to us to pick up the ball where Jens-Erik had left it. About one and a half years ago, we re-entered the discussions with Thomas. And in February 2019, we finally closed the deal. We then agreed upon a cask and sent it over to Scotland, where The SMWS bottled it and released it to its Danish members as “Dramlet: the Dark Prince of Denmark!”. This happened last month, in September 2019.

BM: Fary Lochan is a petite distillery with an comparatively small annual output. So I could imagine that you would need most (if not all) of your casks to cover your own demand. What convinced you to give some of your whisky to an indie bottler nevertheless? And what made The SMWS the perfect partner for such an undertaking?

TSK: Like I said, we wanted to keep all our casks to ourselves at first. But we were willing to make an exception for The SMWS. To us, being part of The Society’s distillery line-up is the finest proof of recognition and a huge stamp of quality. After all, The SMWS stands for everything there is to aim for when it comes to whisky. That’s what convinced us. That and the immense marketing effect afterwards. ;)

BM: “Dramlet” was matured in a 1st fill oloroso sherry cask for six years. Can you tell us a bit more about that particular cask? Based on which criteria did you pick it for your debut on the indie circuit? Where was it stored? How did the spirit inside develop over time?

TSK: The SMWS picked this sherry cask as the right one to start with from a number of cask samples, which we gave them. We were very happy with their choice: A few months earlier, we released another sherry cask whisky that was extremely popular and sold out in one day (at a price of EUR 150 per 50cl bottle). It was pretty similar to the one that The Society wanted, so we knew from the beginning that “Dramlet” would be a well esteemed bottling.

The 1st fill oloroso cask, which The SMWS bought from us, has a very special story. It was filled by Jens-Erik himself on the 13th of February in 2013 – the day of his 50th birthday. It was stored in the same place as all of our other casks, namely in the warehouse in the basement underneath Fary Lochan distillery. Considering the huge symbolic value of this barrel, it was predestined to become The Society’s very first whisky bottling from Denmark (and from the European mainland)!

BM: The release celebrations for “Dramlet” took place at Fary Lochan distillery and select SMWS partner bars across Denmark. Based on the photos I have seen and the feedback I read, those festivities must have been a helluva lot of fun. As someone who was there, how would you describe the reactions of the Danish SMWS’ members to “Dramlet”?

TSK: So far, the Danish members of The Scotch Malt Whisky Society had nothing but praise for “Dramlet”. All of their comments, reviews and reactions were highly positive and respectful. Many people told us that they were very proud of the fact that Fary Lochan in particular and Danish whisky in general was considered good enough for The SMWS. Some fans referred to “the Dark Prince” as “the best Danish whisky” they have ever tasted, while others pointed out that they would never have guessed it “to be only six years old”. Yet again others claimed that we could easily have fooled them to believe that this malt came “from a renowned Scottish distillery”. Needless to say, we are overwhelmed by the very warm welcome the Danish whisky community has given “Dramlet”!

BM: I have a feeling that this was not a one-time affair. Can you already reveal a bit more about Fary Lochan’s future on the indie circuit? Will there be more 141s coming our way? And will there also be bottlings that – unlike “Dramlet” – will go on sale globally rather than domestically?

TSK: As all of this is run by The SMWS, I cannot say too much about it. But I am pretty optimistic that they will continue to collaborate with Fary Lochan. In fact, The Society have already bought a couple of casks with new make from us; two of which got filled by now. The procedure for this goes as follows: The SMWS pick the casks they want at Speyside Cooperage and send them to Fary Lochan. Then, we fill them with our spirit and let them mature on site for some time (presumably six to eight years). Now and then, The SMWS will come and taste the whisky. And eventually they will decide to bottle it. This being said, I hope that The Society will also purchase more casks with fully matured whisky from us and that the next release from 141 will go on sale globally. After all, the raving reactions to “Dramlet” have made members from all over the world curious about our whisky. So, fingers crossed… and in the meantime: Pour yourselves a glass of “Dramlet” or another Fary Lochan whisky to shorten the wait! 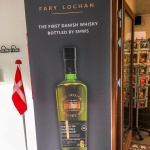 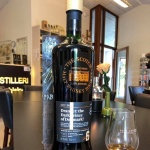