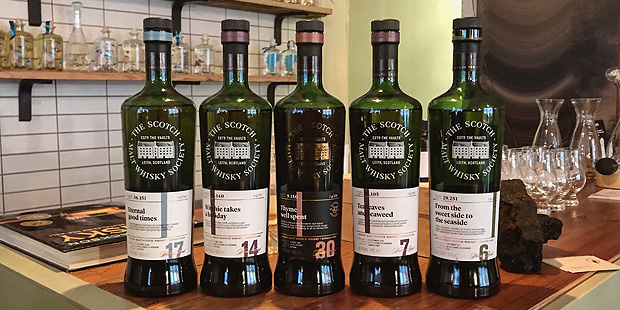 When you are looking for a whisky tasting with a twist in Hamburg, Gearoid O’Callaghan, also known as The Whisky Jack, is the man to talk to.  In addition to Scottish and Irish whisk(e)y, he is also well-versed in coffee, craft beer and trend food. For his tastings, he often teams up with people from these domains to offer his guests out-of-the-ordinary pairings that go beyond the regular dramming routine. In the past, The Whisky Jack already introduced me to unusual but scrumptious combos such as whisky and coffee or whisky and pulled pork. Last Wednesday, he treated me to a less exotic but equally enjoyable pairing, namely whisky and craft beer.

The event took place at Bar Oorlam, which is run by Nienke from the Netherlands. Besides tapping brews for her customers, she also makes jenever under her own brand Filosoof. Consquently, she is not only an expert in beers, but also in spirits. She co-hosted the evening with Gearoid. He told us about the whiskies, all of which were single cask bottlings from The Scotch Malt Whisky Society. She filled us in on the beers, all of which came from her husband’s craft brewery Buddelship. As the event was primarily directed at drammers, special attention lay on the malts. “When you do a pairing,” Gearoid taught us, “always focus on the compontent you know better. Since you guys are whisky fans, you might want to concentrate on the drams and see what the beers do to them. For example, do they become sharper, spicier or sweeter when sipped side by side with the beers?”

We started with a 17-year-old Benrinnes called “Eternal Good Times” alongside a red beer called Roter Klinker.The sweetish, floral whisky offered a lot of honey, cereals and hay. It was already pretty nice on its own, but the malty ale made it even more enjoyable. On the one hand, it intensified the grassy notes in the distillate and on the other hand, it brought mushy fruits into play. Plus, it gave the dram a yummy chocolate aftertaste. Next up was the most controversial whisky of the line-up: a 14-year-old Mortlach from a 2nd-fill ex-bourbon barrel. According to Gearoid, people either love or hate Mortlach because of its meaty quality. Saying that I was in love would have been a bit much. But nonetheless, I liked the pour quite a bit. Other guests, however, did not enjoy it at all. Together with the American-styled IPA named Great Escape, the “Witchie took a holiday” became softer, smoother and easier approachable.

Dram number three was one of my absolute highlights: a black label bottling from Glen Grant that spent 28 years in an Oloroso cask before it was moved to a PX cask for another two years. Much to my surprise, this was not a full-on sherry bomb, but an elegantly balanced Speysider of significant complexity. We paired it with a light Goose and some truly divine Dutch cheese. The accompanying sips and bites made the whisky even fuller and darker. As amazing as I found both the “Thyme well spent” (thus the monicker of the Glen Grant) and the Aufklärung (thus the name of the sour beer), I must say that the cheese was just as good!

Our fourth pairing reminded Gearoid of his home country Ireland. Whisky-wise, we savored a young Glen Scotia called “Tea leaves and seaweed”. Beer-wise, we had a funky pale ale from a calvados barrel called Seawoatr (brewed for Bar Oorlam’s first anniversary). Since the heavy whisky had some disinct tea notes and the aromatic beer was of milky complexion, the combination of the two made for a high percentage version of an Irish tea. Very tasty, indeed.

How do you bring a tasting to an end, in the course of which your guests already had four over-proof whiskies and four generously poured craft beers? The answer is easy: You treat them to a young, wild and boisterous Laphroaig (“From the sweet side to the seaside”) served alongside a dark-as-the-night Russian imperial stout (Eisbrecher)! Here, we did not even try to make out any development in the Scotch. “We’ve reached the point of no return,” Gearoid proclaimed. “You’re having an immensely peaty whisky and a very smoky beer. After that, your taste buds will be done for tonight. Even another Laphroaig could hardly stand its ground. So relax the mind and enjoy the final pairing.” Me and the other attendees were happy to follow up on that advice. Before we turned towards the ‘Phroaig and the stout, however, we gave our hosts Gearoid and Nienke a big hand of applause. After all, they not only provided us with super whisky and great beer, but also with a splendid time!

In the glass (Benrinnes 17yo) 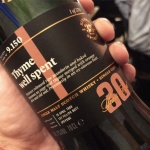 The label (Glen Grant 30yo) 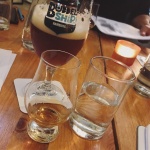 The bottle (Glen Scotia 7yo) 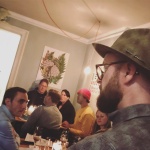 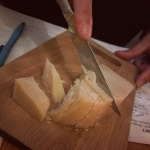 In the glass (Glen Grant 30yo) 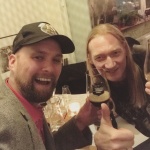